During the fall season, bats make fun and festive decorations for Halloween parties. But the scary situation bats face in the United States is no cause for celebration. A disease called white-nose syndrome is decimating bat populations in the eastern part of the country, and is moving west.

White-nose syndrome (WNS) was first identified in central New York State in 2006 and has now been confirmed in bats in 33 states and seven Canadian provinces. The disease, caused by the fungus Pseudogymnoascus destructans, disrupts hibernation and leads bats to deplete their crucial body reserves needed to survive the winter.

WNS led to the listing of the northern long-eared bat as threatened in the United States and the listing of three bat species as endangered in Canada. Bats are poorly suited for recovery from population declines because most species that are vulnerable to WNS rear only a single pup per female each year. 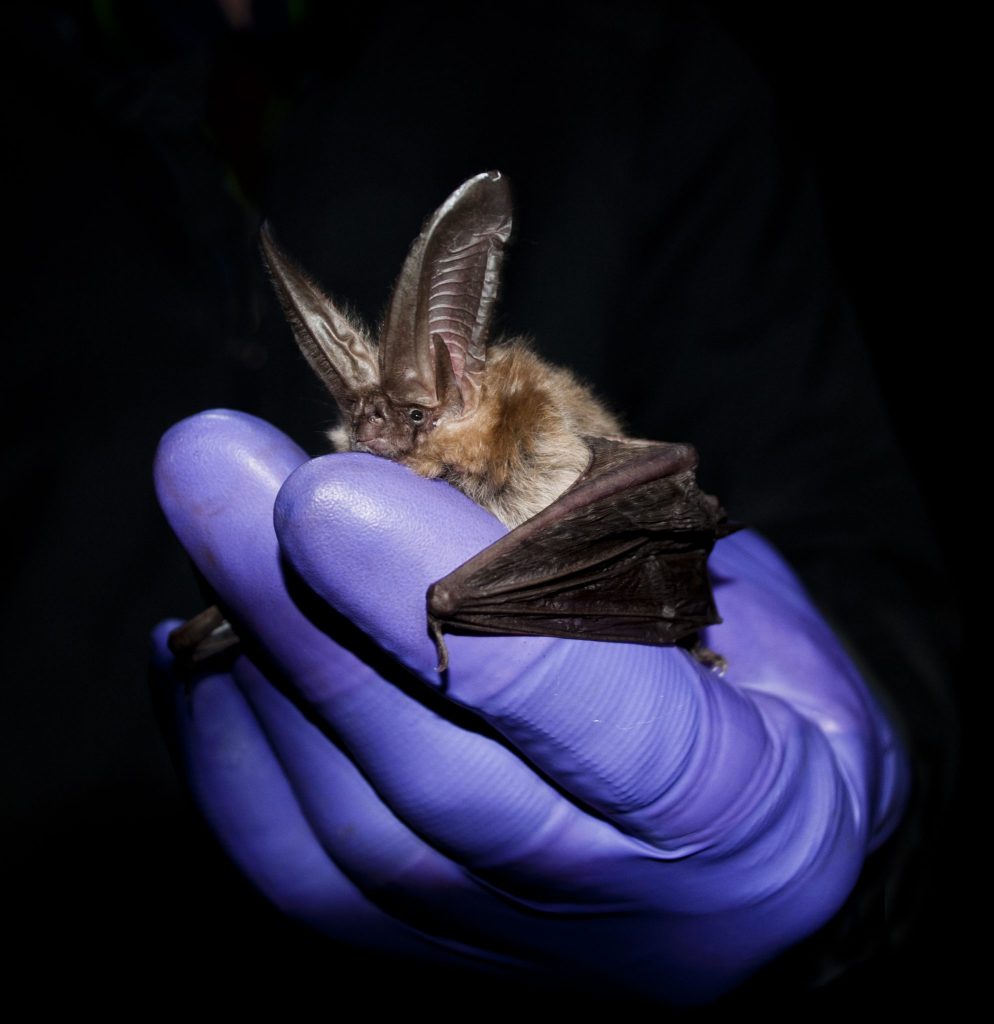 Although WNS has not been observed in Yellowstone, the disease agent was recently found on bats in eastern Wyoming. Biologists anticipate the disease will eventually reach hibernating bat populations that breed in the park. Yellowstone Wildlife Biologist John Treanor explains how bats play an important role in the park’s ecosystem.

“Bats provide many important ecologic and economic services. They eat a lot of things that we don’t like, such as mosquitoes and insects that damage crops and forests and provide a food source for predators like owls and other raptors,” said Treanor.

Because most of Yellowstone’s bat species are susceptible to WNS, there is an urgent need to continue monitoring efforts within the park. Funding from Yellowstone Forever, beginning in 2010, helped develop a proactive program to monitor the distribution, activity, and habitat used by bat species in the park. It is establishing baseline data on bat roost sites, movements, and genetics that will be important to biologists if and when WNS arrives in Yellowstone. 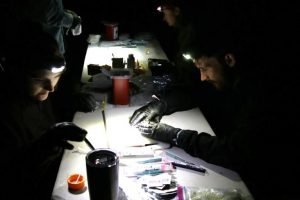 Fall 2019 marks the tenth year that researchers will identify the presence of specific species in different areas of the park by setting up devices that record the bats’ echolocations.

Multiple species of bats have now been recorded in Yellowstone during every month of the year, proving conclusively that there is a resident population of bats that spends the entire winter in the park.

Funding from Yellowstone Forever for bat research has leveraged support from multiple conservation organizations and academic institutions. Currently, Ohio State University is supporting two full-time graduate students to conduct research, and several professional researchers have volunteered their time to help with the study. In earlier years, bat monitoring was focused primarily on Yellowstone’s Northern Range because the recording equipment needed to remotely monitor bats was limited. Thanks to a grant from Canon U.S.A., Inc. to Yellowstone Forever, the monitoring program has been expanded with more advanced technology and to more remote areas of the park. The purpose of the grant is to detect impacts from WNS on Yellowstone bats and better understand the effects of climate change on these sensitive species.

New recording devices, with longer battery life and capacity to store many more hours of recordings, are being used to record bats for long periods in remote locations of the park.

Another element of the study is a project using RFID (radio-frequency identification) tags, which the research team attaches to some little brown bats occupying known roosts. This technology provides more detailed information on the bats’ movements and life spans by tracking tagged individual bats with an automated monitoring system. 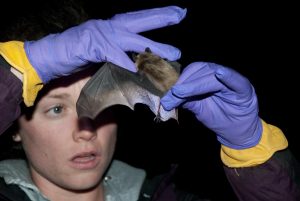 Treanor and his colleagues are narrowing the focus of their research to study the roosting behavior of little brown bats, which have been hit hard by WNS and are now considered regionally extinct in some areas of the eastern United States.

“Little brown bats are the ‘American Robin’ of the bat world,” explained Treanor. “They are one of the most common and widely distributed bat species in North America, as well as in Yellowstone, and they have an important role in the ecosystem among the park’s 13 bat species.”

A coordinated effort among federal, state, and private entities continues to explore ways to slow or halt the spread of WNS in North America. In the meantime, biologists in Yellowstone are prepared to detect WNS as soon as it arrives, and to closely monitor the park’s important bat population.

Learn more about bats in Yellowstone