The Greater Yellowstone Ecosystem is home to the largest concentration of wildlife in the lower 48 states. But a dangerous threat to the ecosystem and its inhabitants lurks deep beneath the surface of Yellowstone Lake: lake trout. This non-native fish is a tenacious problem to the ecosystem, but thanks to escalating efforts through the Native Fish Conservation Program, progress is being made.

Since 1994, Yellowstone has eliminated the threat of nearly 3 million invasive lake trout from the native Yellowstone cutthroat trout’s habitat. Two million of those invasive fish have been removed since Yellowstone Forever donors started supporting this work.

However, despite the massive removal effort, lake trout are still in Yellowstone Lake in large quantities. By investing in the Native Fish Conservation Program, you directly help protect the intricate ecosystem that relies on the Yellowstone’s native fish population.

WHAT NEEDS TO BE DONE

The health of Yellowstone’s native trout population has a direct impact throughout the ecosystem. The continued decline of the park’s native fish could be particularly devastating for birds of prey, the magnificent grizzly bear, and other wildlife species that specifically depend on native cutthroat as a vital food source.

The primary activity of Yellowstone’s Native Fish Program is removal of the invasive lake trout from Yellowstone Lake. Gill nets are used for this process: panels of net extend upward from the bottom of the lake about six to eight feet high and for many miles. These nets are lifted twice a week, getting rid of thousands of non-native lake trout.

Yellowstone National Park and contract crews removed: 282,960 fish between May and October in 2019 compared to 297,110 in 2018, and 396,950 in 2017, a 29% decline over three years.  Additionally, the catch of large adult fish continues to decline dramatically each year. These are likely indicators that the lake trout population is on the decline, which is great news for the native cutthroats.

In total, gillnetting has removed over 3 million lake trout since 1994, of which roughly 2 million have been removed over the past six seasons, during the period Yellowstone Forever has supported the increased effort.

By supporting this project, you ensure the continued decline of the invasive lake trout and restoration of an ecosystem dependent on the native cutthroat trout as a vital food source.

It’s astounding what harm a single invasive species can have on the Yellowstone ecosystem. Lake trout are predatory, and one mature lake trout can eat approximately 41 native cutthroat trout per year! Lake trout threaten the survival not only of the cutthroat trout but also the many species that depend on the cutthroat, including grizzly bears, osprey, otters and bald eagles.

Most predators can’t catch lake trout as a substitute for the cutthroat because the lake trout live in deep water and are quite large. Because of this lake trout have no natural predators in the park’s ecosystem, and can potentially live to their 30s and 40s in Yellowstone Lake if they are not removed by netting. The life span of cutthroat is typically 10-12 years. 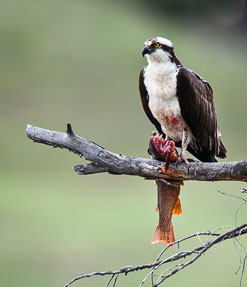 An osprey with a cutthroat trout/Cindy Goeddel Photography

One example of the harmful effects of lake trout is the decline in the osprey population over the course of Yellowstone National Park’s history. In the mid-1900s, heavy use of pesticides resulted in a decrease of birds of prey—including osprey—across the U.S. When many of those pesticides were banned, ospreys saw a resurgence. But since Yellowstone began monitoring osprey annually in 1987, the park’s population of osprey again declined, particularly on and around Yellowstone Lake.

A recent study found a significant relationship between the decline in cutthroat trout and osprey reproduction at Yellowstone Lake.

We live in a small and unique world. Preserving it and making sure it endures is our legacy. [Yellowstone Forever] has inspired and educated our family on the beauty and importance of Yellowstone National Park, all while having amazing family vacations and a tremendous amount of fun.
William F., Florida
Donate Now