Legendary Teamwork of Moran and Jackson Puts Yellowstone on the Map

The end of the tale is the most familiar: artist Thomas Moran and photographer William Henry Jackson returned from the Hayden Expedition with images that helped convince Congress that Yellowstone should be protected as a national park. But what twists of fate brought these two men together, and how did their synergy result in these influential and enduring images of Yellowstone? It seems a combination of artistic talent, a leader’s foresight, corporate dollars, and a little luck are to thank for the legendary pairing.

In March 1871, the US Congress appropriated $40,000 to finance a survey, led by geologist Ferdinand Vandeveer Hayden, to explore northwestern Wyoming. Thomas Moran, an illustrator for Scribner’s Monthly magazine, heard about the expedition and was interested in going. However, as Yellowstone National Park Historian Alicia Murphy explains, he was disappointed to learn there was already an artist attached to the survey party.

“Henry Wood Elliott had been designated the official painter for the survey, but backroom deals and political wrangling paved the way for Moran to join the group as well,” said Murphy. “Jay Cooke, the financier behind the Northern Pacific Railway, pulled strings to get Moran a last-minute spot, as the rail company had its eye on opportunities for tourism and relied on original artwork for advertisements. Moran’s way was paid half by Cooke and half by Scribner’s.” 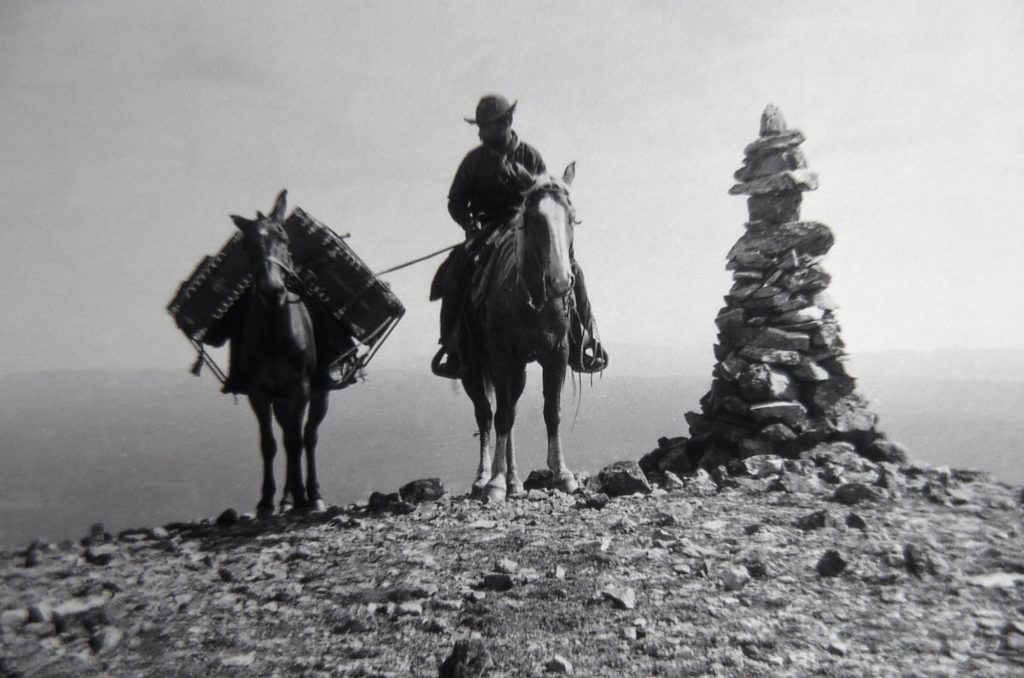 Unlike Moran, photographer William Henry Jackson had been hired by the US government to document the expedition into Yellowstone, following a stint as a contractor on a smaller survey the prior year. Not many people of that era had the skills and equipment to produce photographic images in the wilderness. Yet Murphy explains that while Jackson did possess special expertise that earned him a role in Hayden’s operation, luck was also on his side.

“There was a little serendipity involved,” said Murphy. “While in Omaha, Hayden strolled into Jackson’s family owned photography studio. Hayden obviously liked what he saw—at the time Jackson was taking landscape photographs in addition to portraits—and understood the need to bring a photographer on his expeditions to lend credence to what they would find.”

Moran and Jackson, who had not met prior to the Hayden Expedition, developed a close friendship and productive professional partnership during their journey into Yellowstone’s unfamiliar wilderness. The two men collaborated on selecting views and creating images that produced a visual record of the expedition.

“They both were looking for landscapes to capture, especially the more fantastical aspects of Yellowstone. When you look at their work you can tell they were trying to set up scenes that were emblematic of the area,” said Murphy. “Moran was able to use imagination more so than Jackson. He could take some liberties and show the essence of a place rather than the literal details.”

Moran documented more than 30 sites, and returned home with dozens of sketches and watercolors he had produced in the field to translate into finished paintings. Meanwhile, Jackson broke new ground as the first photographer to be included on a major expedition, as photography was a relatively new technology. 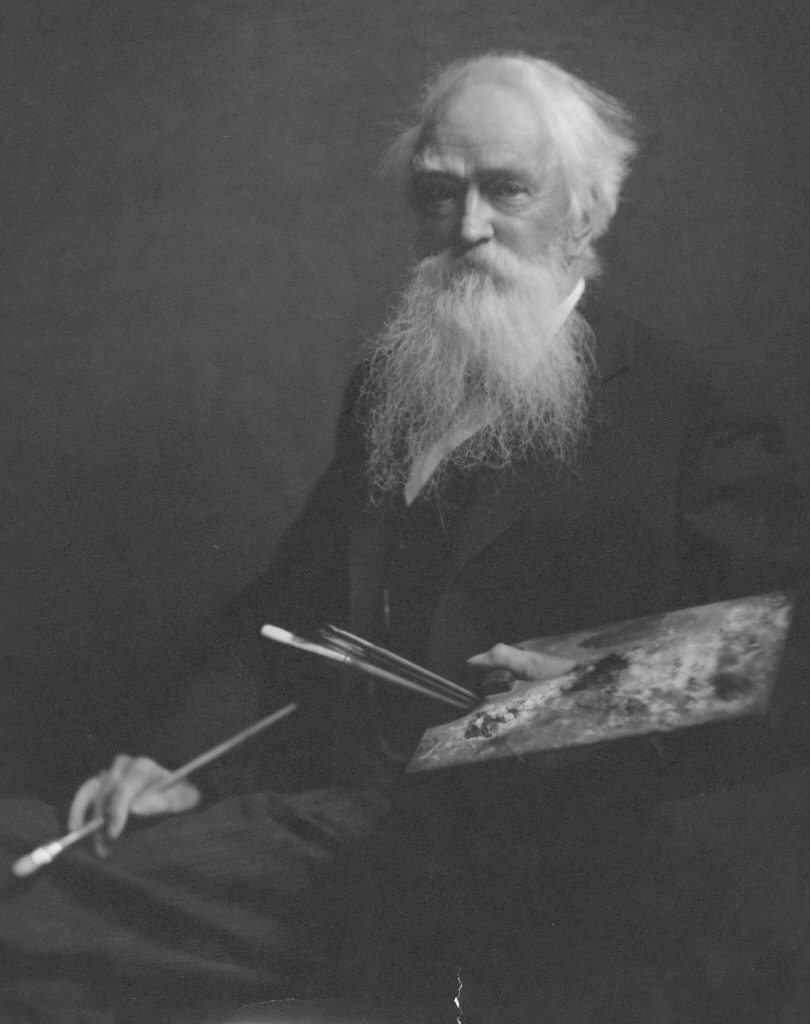 “Jackson had to develop every single photo in the field, immediately after taking it,” said Murphy. “It was an arduous process, which required him to haul around 300 pounds of equipment through Yellowstone’s rough terrain on pack mules.”

Moran would later use several of Jackson’s photographs for reference in his paintings. Some of the locations they both documented included the Grand Canyon of the Yellowstone River, Tower Fall, Castle Geyser, Mammoth Hot Springs, and Liberty Cap.

Moran’s personal diary indicates the two men worked together closely. He mentioned on several occasions aiding Jackson in composing his photographs, and multiple entries said he was “sketching and photographing.”  One entry reported he “sketched but little but worked hard with the photographer selecting points to be taken,” and in another he wrote he “did some photography in the Lower Canon [sic].”

“Moran and Jackson enjoyed working together and admired each other’s work. They later went on at least two additional expeditions together in the West. In both cases, it appears that Jackson was invited at Moran’s suggestion,” said Murphy. 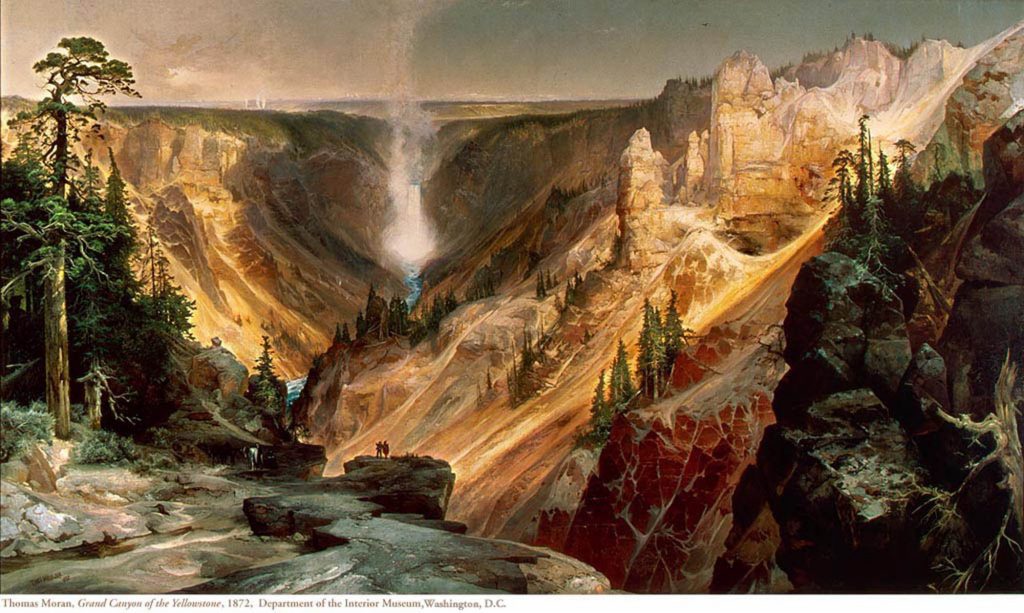 The Grand Canyon of the Yellowstone, Moran 1872

The images the two men brought back from the expedition caused a sensation. For many years, stories of Yellowstone’s wonders from trappers had been met with skepticism and largely dismissed as tall tales. But Jackson’s photographs provided undeniable proof of their existence, and Moran’s romanticized paintings brought the wonders to life in full color.

When legislation to establish Yellowstone National Park was introduced in Congress, Jackson’s and Moran’s images were reported to have played a critical role in the debate that led to the establishment of Yellowstone as the world’s first national park in 1872.  Their artistic visions influenced how the world saw—and ultimately valued—Yellowstone.

The priceless photographs and paintings produced by these two artists preserve a version of Yellowstone frozen in time, on the cusp of worldwide fame as a national park. The enduring images tell the story of the park’s exploration and establishment in a way that words alone cannot, and continue to inspire new generations of stewards to discover and protect Yellowstone’s treasures.