Park Peaks: The Creation and Significance of Yellowstone’s Mountain Tops

With more than 40 peaks in the park soaring over 10,000 feet and at least 70 named mountains over 8,000 feet, you’d think that the park’s highest points would be first and foremost on visitors’ minds. But that’s not always the case. The fact that Yellowstone is also home to grizzly bears, wolves, bison, and top-notch fishing—not to mention the world’s biggest and best collection of thermal features—has something to do with it.

It’s also because many of these imposing mountains are in roadless areas, making them extremely hard for climbers and other visitors to get to. There’s also the fact that they sit on or near a volcanic plateau with an average elevation of 8,000 feet (a result of the Yellowstone hotspot bulging upward by one-third mile during the past 2 million years), so there aren’t the valley-to-summit views that make a range like the Tetons so captivating.

Yellowstone’s mountains may fail to get the respect they deserve—often seen simply as backgrounds for photos or as something you have to get over to get somewhere else. Yet how they came into being laid the groundwork for the park’s existence.

Hiking to the top of Electric Peak | YF / Matt Ludin

The oldest mountains in the park are found on the west side in the Gallatin Range, a result of the Sevier Orogeny—a mountain-building phase that began 150–140 million years ago. “It started west of Yellowstone proper and was produced by thin skin tectonics or faulting,” park geologist Jefferson Hungerford explains. “Basically, at a break in the Earth’s crust, older layers of sedimentary rocks were pushed above younger rocks, stacking them upon one another.” This can be seen along Route 191 overlooking the Gallatin River.

The base of the Gallatins also shows effects of the Laramide Orogeny, a thick-skinned faulting that started 70 million years ago and ran to about 40 million years ago. “Mountain building of this type is a result of reverse faults, which are a lot steeper, and they brought out basement rock,” Hungerford points out. “This is the gneiss and crystalline rock also visible along the Gallatin River on the west side of the park.”

These ancient rocks, known for their banded appearance representing alternating layers composed of different minerals, were buried far below the surface and then brought to the top by the stress put on the Earth’s crust by continental collisions. During the Beartooth Uplift, which also occurred during the Laramide Orogeny, the same process brought up the oldest rocks in the park:  2.7–3 billion-year-old outcrops of gneiss and schist visible in the cliffs along the Lamar River Canyon. 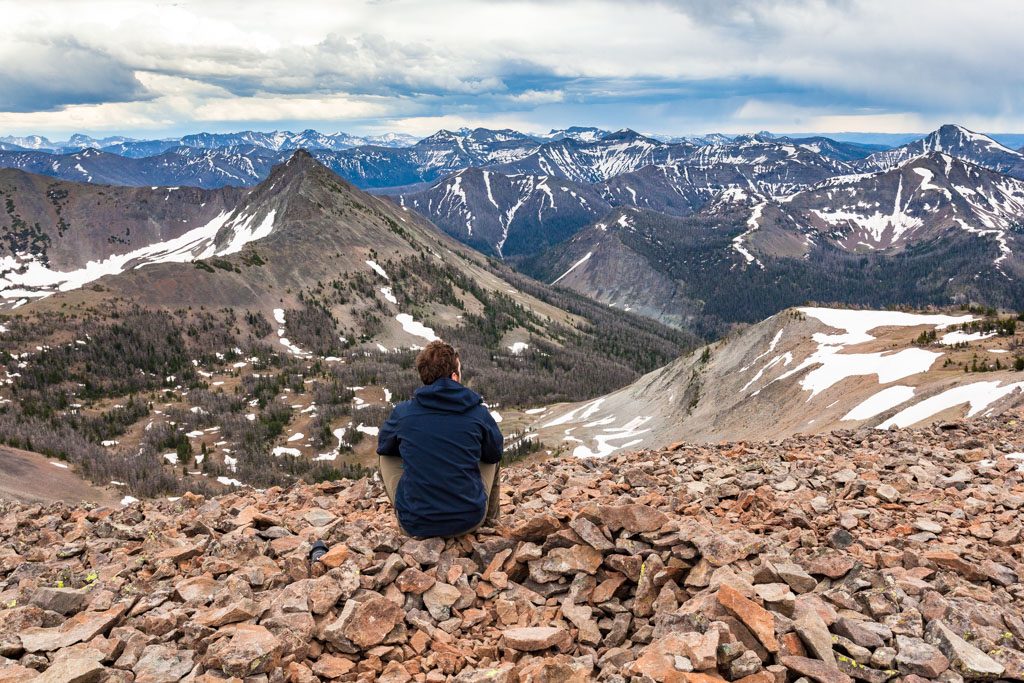 On the east side of the park and south of the Beartooths stands the Absaroka Range, which was created 55–48 million years ago by volcanic activity resulting from the oceanic crust going beneath the continental crust, causing magma to push to the surface and create volcanoes.

“The subduction-related volcanic edifices of the Absaroka Range actually go from the eastern side of the Washburn Range to Paradise Valley, as well as to Sepulcher (9,642 feet) right by Mammoth down and to Eagle Peak, the highest point in the park at 11,372 feet,” Hungerford says. “They’re all remnants of volcanoes—cones, lava flows, and debris from those lava flows formed during the Absaroka volcanic period.”

Though not built in the same manner as the park’s highest peaks, there are also other rock formations that stand out from the landscape. “The travertine in Mammoth and some of the sinter and geyserite forming around Upper Geyser Basin are part of an expression of heat from the magmatic system down below,” Hungerford says. “There are also lava flows that get eroded away or are very steep, like National Park Mountain (7,553 feet). That’s a rhyolite flow that’s a mountain—it’s in the name!”

As impressive as the volcanic remnants and mountain ranges are in the park, Hungerford acknowledges that they were once even more imposing. “Though we don’t know exactly how tall they got, they were definitely taller than what they are now,” he says.

The reason for their drop in elevation is mainly due to one factor: glaciers. For nearly the last 2 million years, Yellowstone and the rest of North America have experienced large swaths of time when the land was covered with these massive fields of ice that moved either because of gravity or the pressure of their own weight.

“We had 2,000–3,000 feet of ice above us and above the mountains, and when that ice flowed, it mowed mountains down and tore them apart,” Hungerford explains. “For instance, the Gallatin Range looks like it’s been terrorized by glaciers—both by an ice sheet and later, when the ice sheet receded, by alpine glaciers.”

Alpine glaciers are large collections of snow and ice that form cirques, the steep-walled, deep-floored basins that are found high up in the mountains. As these glaciers flow downhill, they create V-shaped stream valleys and more rounded or U-shaped valleys. 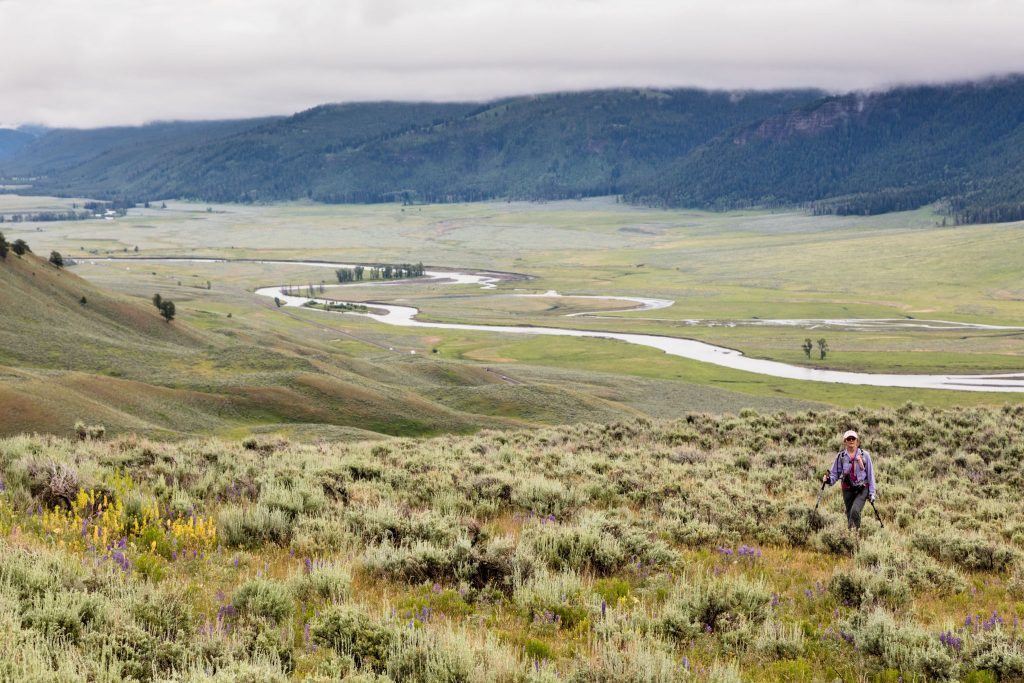 “Lamar Valley is a perfect example of this,” Hungerford adds. “Those big U-shaped valleys really let you see the old ice sheets at work.” With the glaciers disappearing, they left a fertile landscape and life-giving waterways— all protected by the wall-like fortification of the surrounding mountains—that became home to the flora and fauna that define Yellowstone.

It’s not just ice that can take out mountains—it’s fire too. That’s because, though many associate volcanic activity with razing the landscape—as we see on the volcanic plateau, in the Absarokas, and lava flows—it also can have the reverse effect.

“Sometimes we forget that we have had massive explosive eruptions from one of Earth’s largest volcanic systems that decimated mountain ranges on its way,” Hungerford explains. “Stand up on Mount Washburn and look southwest into the caldera and you’ll see low topography between sets of mountain ranges. That’s the track of the volcano.”

For a geologist like Hungerford, studying mountains has many implications. “In terms of the more distant mountains, we study the rock record that’s displayed on them to tell us a lot of what went on in the park and when different rocks and formations were deposited,” he says. 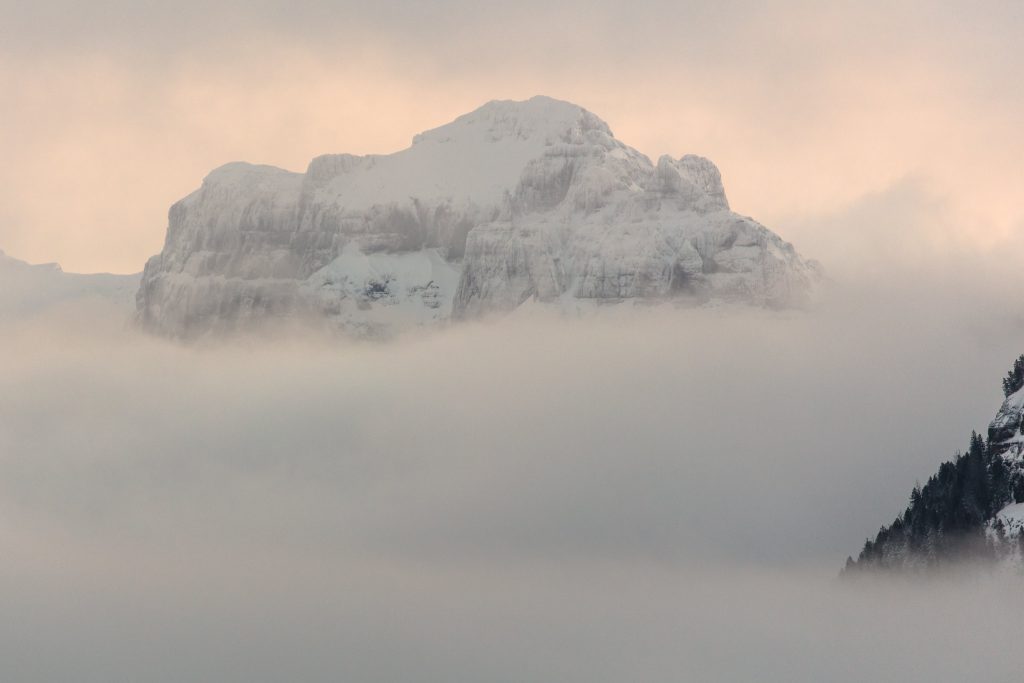 Though glaciers are gone from Yellowstone, park scientists also keep an eye on the continual wearing away of edifices. “Changing climates definitely change precipitation patterns and they affect rates of erosion,” Hungerford explains. “It could be we start to get energetic rains or other events that actually increase erosion in some areas.”

When it comes to monitoring high peaks, park staff give priority to those that are most accessible to ensure visitor and staff safety. “We watch them when they are around infrastructure to make sure they are not dropping big boulders on roads and such,” Hungerford adds.

But there are more than rocks on these ridges and slopes that need watching. Given many of the peaks’ remoteness and heights, it’s not always easy to keep an eye on them, says park botanist Heidi Anderson. “These are the least studied areas of the park,” she notes.

That hasn’t stopped scientists from determining that in recent years widely distributed, early blooming plants are blooming 20 days from historical documentation. This means that climate change could significantly impact the natural process of Yellowstone’s high-altitude environs. In 2008, the park began monitoring sections of alpine ecosystems as a part of the Global Observation Research Initiative in Alpine Environments (GLORIA). “This is part of an ongoing project on how climate change and other factors, like pollution, affect the status and trends of native plant communities, invasive and exotic plant and soil condition, and temperature,” Anderson explains. 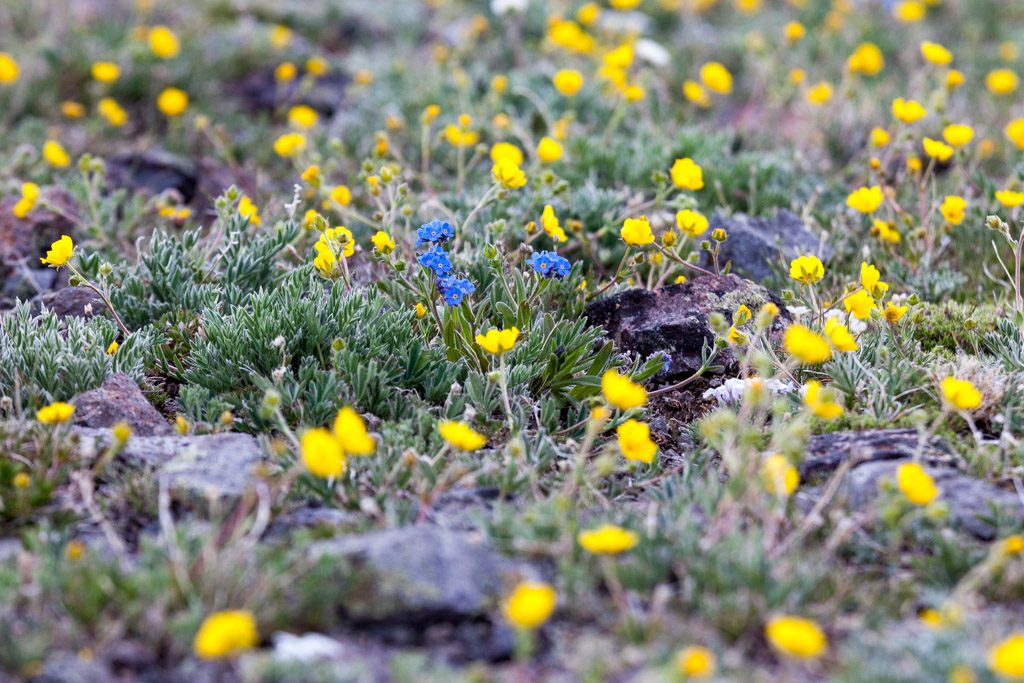 Given their heights, these peaks are home to Yellowstone’s impressive snowpack. With their location on the Continental Divide, the mountains’ snowmelt empties into watersheds that serve large swaths of the United States. But with climate models projecting a general decline in western US snowpack throughout the next century—and evidence already showing later freezes and earlier thaws— it remains to be seen if Yellowstone’s summits continue their role as the nation’s headwaters.

Projections like this and the studies conducted by park scientists are reminders that while they seem to the naked eye to remain largely unchanged, Yellowstone mountains are windows into the evolving nature of the park’s landscape. Going forward they will provide clues to Yellowstone’s changing ecosystem and its effect on the park and beyond.

This article was originally published in the Summer 2019 issue of Yellowstone Quarterly.