Dragons lurk in caves in Yellowstone National Park—or so it might seem! If you find yourself in the Canyon area, you might hear the stirrings of mythical creatures from deep inside a cave at Mud Volcano. The “dragon” found here is actually a hot spring aptly known as Dragon’s Mouth Spring. Gasses and steam from the spring create pressure bubbles that explode against the roof of the cave—creating a booming and gurgling noise that might sound like the growling of a dragon from deep within the cave. Read more about dragons in Yellowstone >>

Ghosts Appear in the Mist

Ghostly formations appear in the park when the weather turns cold, but they are actually caused when hydrothermal steam covers adjacent trees. Water droplets from the steam freeze, encasing the trees in a ghostly coat of what is known as “rime ice.” Look for ghost trees in the dead of Yellowstone’s winter, where temperatures can plummet to minus 30 degrees F. Ghost Tree at the Mammoth Terraces

Bears, wolves, cougars…all likely suspects on Yellowstone’s list of carnivores. But did you know Yellowstone is home to carnivorous plants too? Bladderworts and sundews have adaptations for catching prey such as water fleas and mosquito larvae. Bladderworts have a “trap door” that closes in on prey, while sundews have red leaves that glisten with mucilage that attracts unsuspecting insects. 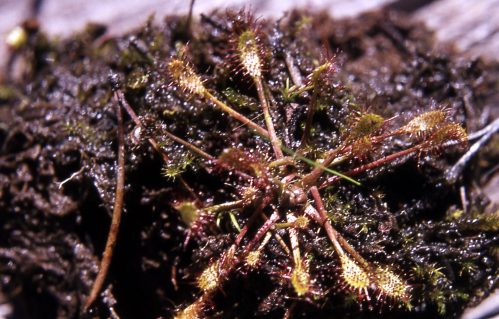 Sundews have tentacles that attract prey

Yellowstone’s mud pots have long thrilled and fascinated park visitors, from present-day tourists to early explorers. These gooey mixtures gurgle and bubble, and are caused by thermal water and gases rising up from beneath the Earth’s surface.

Similar to mud pots, the Boiling River and Firehole River can certainly conjure images of hellfire and brimstone—but they are actually the result of thermal runoff mixing with cold river water. Soaking is permitted at certain locations along these Yellowstone rivers, but can be hazardous during times of high water.

Ravens and Bats Fill the Air

Ok, they don’t literally fill the air, but they do call the park home! Thanks to stories from authors like Edgar Allen Poe, these winged creatures are often associated with doom and gloom. Today we know a lot more about ravens and bats, and Yellowstone serves as an ideal outdoor laboratory for studying them in their natural habitat. Studies show that ravens are highly intelligent birds, and work together with wolves to obtain food. Bats continue to fascinate national park visitors today—in fact, more than 50 unique species of bats live in national parks! Bat Week is celebrated each year from October 24-31. Yellowstone is home to 13 species of bats

The Earth Thumps and Shakes

Yellowstone is one of the few places in the world where you can see, feel, and even hear powerful geologic forces that lie below the Earth’s surface. At Black Sand Pool near the Upper Geyser Basin, the ground shakes from low-frequency thumps made by bubbles imploding deep beneath the spring. The thumps that occur every few minutes are followed by a surge of bubbles on the surface of the pool as the gasses escape. Take a listen >> 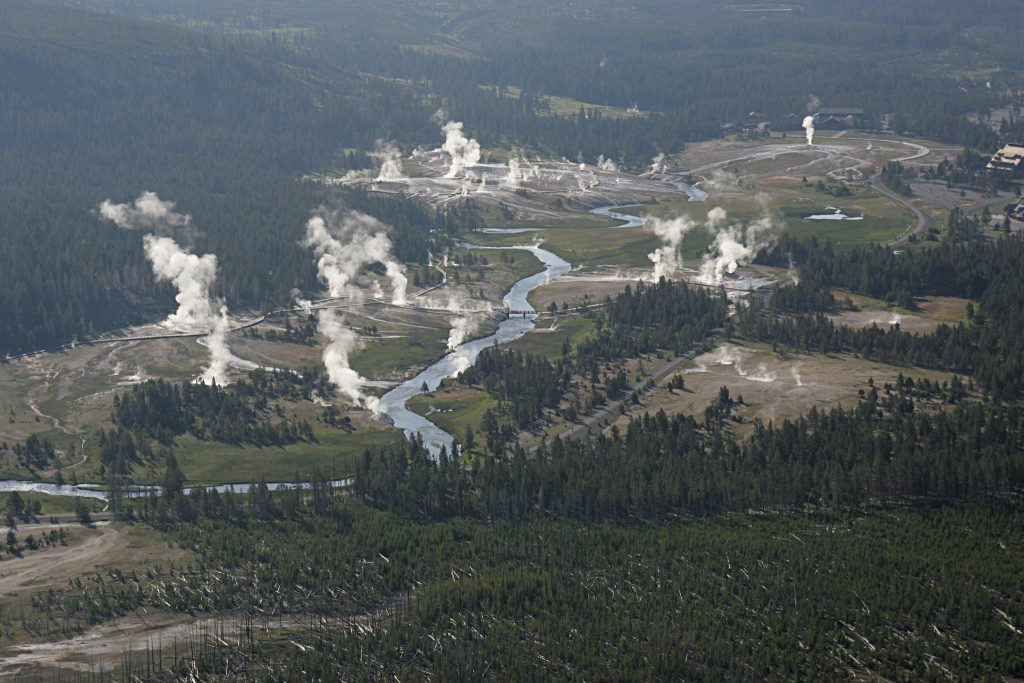 An aerial view of the Upper Geyser Basin

At the top of Craig Pass at the Continental Divide, you’ll find Isa Lake. Because it straddles the Continental Divide, this peculiar body of water was probably the only lake on Earth that once drained backwards to two oceans—the east side draining to the Pacific and the west side to the Atlantic. Today, this likely only occurs at the peak of snowmelt following winters with heavy snowfall.

We know Yellowstone’s wildlife put up with long, harsh winters—but did you know there are creatures that survive (and thrive!) in the park’s hydrothermal features? Microscopic organisms known as thermophiles are found in places like Grand Prismatic Spring. Nourished by energy and chemical building blocks available in hot springs, the organisms are actually responsible for the spring’s vibrant colors. While many of these weird occurrences now have a scientific explanation, the phenomenon known as “lake music” remains a mystery. Since the park was established, explorers and tourists have reported a strange buzzing sound that moves across Yellowstone Lake. Visitors who camp in the Lake area still report hearing the sound today—and despite numerous scientific studies, no one has yet been able to explain what causes the unusual noise.

A dark and stormy day at Yellowstone Lake

The Whole Place is a Volcano

Yellowstone doesn’t just have a volcano—Yellowstone is a volcano. And it’s active. A plume of molten rock that rises beneath the park creates one of the world’s largest active volcanoes. Scientists don’t expect an eruption anytime soon, however, and continue to monitor volcanic activity in the park today. Learn more about the Yellowstone Volcano >>

Yellowstone National Park is certainly an unusual place, but that’s exactly what makes it so special! The park is living proof that what often scares us is actually an incredible phenomenon waiting to be discovered—that can teach us more about the intricacies and wonders of the natural world.

Happy Halloween from all of us at Yellowstone Forever!

All photos and video courtesy of Yellowstone NPS.