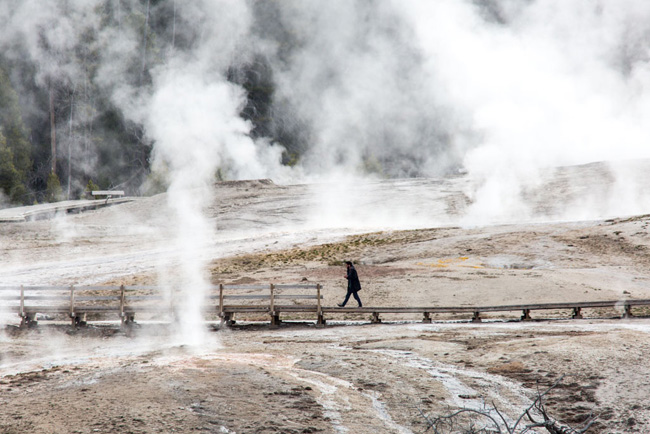 Yellowstone doesn’t just have a volcano, Yellowstone is a volcano. And it’s active. A plume of molten rock that rises beneath the park creates one of the world’s largest active volcanoes, and we can see evidence all around us in the form of geysers and hot springs. But before you start pondering a different vacation destination, find out what scientists who monitor the Yellowstone “supervolcano” have to say about the likelihood of an eruption.

Blasts from the Past

The first major eruption of the Yellowstone volcano, which occurred 2.1 million years ago, is among the largest volcanic eruptions known, covering over 5,790 square miles with ash.

The most recent m ajor eruption, 640,000 years ago, caused the ground to collapse into the magma reservoir, leaving a giant caldera. Subsequent lava flows filled in much of the caldera, and it is now measured at 30 x 45 miles. If you look at a modern park map, you can see the outline of the caldera (see white area).

The Yellowstone “supervolcano” is a topic surrounded by much curiosity and—sometimes—speculation. For the real facts, we went straight to an expert, Jake Lowenstern of the U.S. Geological Survey (USGS). Lowenstern is Scientist-in-Charge of the Yellowstone Volcano Observatory (YVO), which monitors the Yellowstone caldera.

“The Yellowstone volcanic system has experienced two supereruptions, or events resulting in accumulation of more than 250 cubic miles of debris. That’s enough material to bury the state of Texas five feet deep!” says Lowenstern. “Any volcanic system that’s resulted in a supereruption is dubbed a supervolcano.”

Lowenstern explains that Yellowstone’s geysers and hot springs are a direct consequence of the volcanic system. These features exist because of the high heat discharge from the molten rock that fuels the volcanic eruptions. Heat is conducted from the molten rock—found four to five miles beneath the surface of the park—upward to the groundwater system, creating spouting geysers and bubbling hot springs.

The Next Big Eruption

Visitors frequently want to know whether the Yellowstone volcano will erupt any time in the near future.

“No one can answer that question,” said Lowenstern. “We do not expect an eruption soon. The most recent period of dormancy has already lasted 70,000 years and may continue for thousands of additional years.

“Yellowstone will reawaken some day to host more eruptions. But volcanoes like Yellowstone don’t erupt without warning. We’d expect months of intense activity prior to any future eruption.”

The rim of the caldera can best be seen from the Washburn Hot Springs overlook, south of Dunraven Pass. Gibbon Falls, Lewis Falls, Lake Butte, and Flat Mountain Arm of Yellowstone Lake are part of the rim.

The YVO is watching closely for that activity. The team includes staff from a variety of different universities, along with federal and state geological agencies, who have considerable experience forecasting eruptions at volcanoes around the world. In fact, the volcano program at the USGS has a twenty-person unit that specializes in forecasting volcanic eruptions.

“At any given time, 10 to 20 volcanoes are erupting somewhere on Earth. Typically, volcanoes give weeks to months of warning prior to their initial eruption. Volcanoes like Yellowstone typically take even longer.” explained Lowenstern.

Interesting in doing some tracking yourself? The USGS releases updates on earthquakes and volcanic events through free, automated subscription services (e.g., the volcano notification system). The YVO and University of Utah websites have real-time feeds for earthquake and other monitoring information.

Anything notable is also released through Facebook and Twitter. Lowenstern adds that, for those with a passion for earthquake and volcano monitoring, there are even free software programs that allow you to inspect the data in real time on your computer.

Learn more about the Yellowstone Volcano >>