An extended version of this article originally appeared in the Spring 2018 issue of Yellowstone Quarterly. 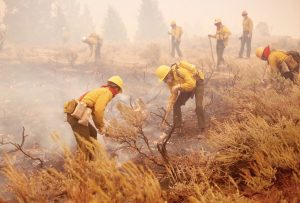 The Fires of 1988 that burned 1.4 million acres in the Greater Yellowstone Ecosystem—including 793,880 acres of the national park—were the result of a perfect storm of environmental and human factors. You name it: whatever Mother Nature needed to create a large-scale fire event was present during that summer 30 years ago.

Unusually high winds. Drought conditions. Heavy, dry, fuel accumulations. Low humidity at night. A higher-than-usual number of fires caused by lightning—39 fires compared to the average yearly total of 26—plus six fires caused by humans. Another five fires originated outside and burned into the park. With all these factors in play, it’s easy to see why it took what was at the time the largest fire-fighting effort in U.S. history to battle these blazes. Appropriately, the environment that created this inferno also put it out when snow blanketed the park during the second week of September. During and shortly after the fires, as images of one of the nation’s most revered natural landscapes being burned to a crisp captivated the world, National Park Service (NPS) officials were heavily criticized in the press and by politicians for basically letting nature take its course.

Even President Ronald Reagan weighed in, calling what everyone dubbed the “Let It Burn” fire policy “a cockamamie idea.” Still, while the public and un-initiated were taken aback by the size of the fire, not everyone was surprised.

Renowned Yellowstone naturalist Paul Schullery noted that only months before the fires of 1988, fire and plant ecologists had reported that the Yellowstone area historically involved many small fires interspersed every 200–400 years by massive fires that swept across large portions of the park. The last major burn had happened in the 1730s, meaning Yellowstone was ready for another major burning cycle. 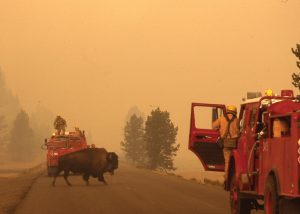 It didn’t take long for the basis of the park’s fire policy, which had been in place since the early 1970s to “maintain the ecological role of fire by allowing natural processes to occur with a minimum of human influence,” to be proven right—as anyone who came to Yellowstone would soon see.

“There was a lot of rhetoric about the park never being the same,” said Roy Renkin, who fought fires in Yellowstone in college before spending the last 40 years in the park as a vegetation management specialist. “But the people in the park who understood fire history had expectations about what would happen next.”

These folks knew that the positive results of fire in Yellowstone include opening up the serotinous cones of the lodgepole pines, allowing for new trees to grow. Plus, fire opens up forest canopies to allow new plant communities to flourish. The burn also released nutrients from fallen trees and dead vegetation, which increased the productivity of soil. 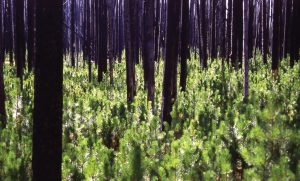 It was also noted the animals in the park were largely unaffected by the flames, and many—save the moose which prefers old growth forests—benefited after the fact. The burn created new feeding opportunities for birds and grazing animals as well as the species that prey on them.

In 1989, a then-record 2.7 million visitors flocked to Yellowstone to learn how the fire had affected the park, and learning more about the area’s ecology actually increased the public’s interest in the park.

“The ’88 fire was a reaffirmation that fire was what this landscape needed, and it was a great opportunity to get that message out,” says John Cataldo, Yellowstone’s fire management officer.

For the time being, the park strategy remains to stay out of nature’s way unless it endangers human lives or livelihoods along with cultural or historical landmarks. The park also suppresses any fires caused by humans, and those that threaten the safety of the park. The remaining fires are managed for resource and ecological benefit.

“The plants and animal communities have been adapting and evolving for a millennia to different compositions of vegetation,” Cataldo says, “so as long as we keep Yellowstone wild, we’ll be doing the right thing.”