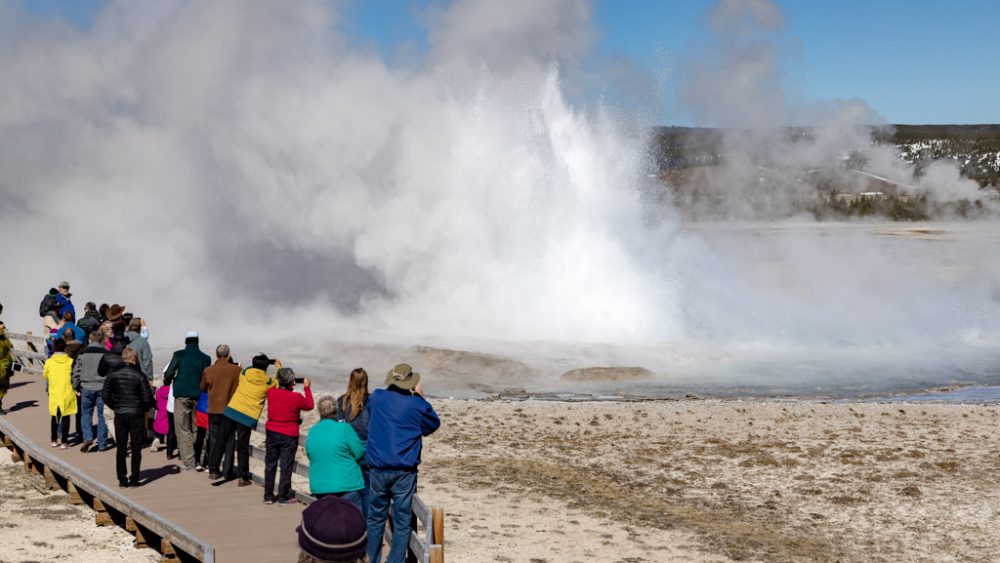 On March 15, 2018, a billowing column of steam and hot water burst into the early morning sky at Norris Geyser Basin. Steamboat Geyser was erupting! Because Steamboat shows itself infrequently (this was the first eruption since 2014) its eruption was very exciting news for park lovers and scientists alike. Known as the tallest geyser in the world, Steamboat’s eruptions can be quite spectacular, emitting a roiling tower of steam visible for miles and water shooting more than 300 feet into the air. Steamboat erupted again on April 19, 27, and May 4, with more eruptions during the summer. This recent activity was interesting, not only because of the impressive steam and water show, but also for the opportunity to gain clues about what’s happening underground.

Each year, millions visit Old Faithful, Norris Geyser Basin, and other thermal areas to witness the bubbling, gurgling, spouting, and bright colors of the park’s otherworldly features. Yellowstone protects more than 10,000 mudpots, hot springs, and fumaroles, and the largest concentration of active geysers in the world. These hydrothermal features are much more than what meets the eye; they are signs of a complex, active, volcanic system pulsing beneath. Standing in the center of the caldera, near Norris Geyser Basin to the north, Mallard Lake, or Le Hardy Rapids, magma is only 3–4 miles beneath your feet. The recent eruptions of Steamboat are just a paragraph in the current chapter of an epic geologic story. Seventeen million years ago, an intense period of volcanism began near the present-day Nevada-Oregon-Idaho border. For the next 14 million years, the North American tectonic plate drifted southwest across a thermal plume fixed in the earth’s mantle, its path punctuated by caldera-forming eruptions. Just over 2 million years ago the first of three eruptions occurred in the area we know as Yellowstone, and one of the largest ever super volcanoes was discovered. While experts don’t expect another eruption anytime soon, that underground “hot spot” continues to shape the park we see today.

The Yellowstone caldera is in almost constant motion. Magma from deep in the earth rises, providing heat and pressure to the rock and liquids above. Hydrothermal fluids move in and out of fractures in the rock, building up and releasing pressure. As a result, the caldera lifts, falls, and quakes. When pressures rise, the ground lifts. The stress from that uplift, combined with shifting in the tectonic plate, creates fractures in the rock, resulting in earthquakes. As fluids drain out, the pressure drops and the ground subsides.

It takes a village to keep an eye on all this activity. The Yellowstone Volcano Observatory (YVO)—a collection of eight agencies: United States Geologic Service, Yellowstone National Park, University of Utah, University of Wyoming, UNAVCO, Wyoming State Geological Survey, Montana Bureau of Mines and Geology, Idaho Geological Survey—along with a host of other geologists, use a network of scientific instruments to interpret  the signals that the volcano is sending. How deep is the magma? How are hydrothermal features connected to each other, and to the magma below? Is it the hydrothermal system or the magma causing the ground to rise and fall? These and other questions are of intense interest to scientists trying to understand the forces driving Yellowstone’s thermal system, as well as to predict hazards that may arise from the volcano’s activity. For this reason, the YVO regularly monitors earthquakes, ground deformation, temperature, gases, and water levels. This monitoring also helps the National Park Service (NPS) protect and preserve the unique hydrothermal system that so many visitors come to see.

There are thousands of earthquakes in Yellowstone each year. Although most aren’t felt by humans, these earthquakes are measured via 22 permanent seismometers as part of the Yellowstone Seismic Network (YSN), operated by the University of Utah, USGS, and NPS. Because seismic waves travel through molten, versus hard, rock at different rates, studying earthquakes can provide images of the magma chamber below. From these images, scientists learned that the Yellowstone magma reservoir—roughly the size of the caldera and 3–4 miles below ground— is structured less like an open chamber of magma, and more  like a sponge, with cracks and holes that molten rock moves throughout. A recent study by Peter Nelson and Stephen Grand using deep seismic waves revealed that this shallower magma reservoir is fed by a plume of magma extending all the way from the core-mantle boundary, some 1800 miles below ground. Yellowstone’s caldera floor rises and falls up to several inches per year. Although volcanoes can fluctuate for thousands of years without erupting, ground deformation can indicate important events, like an infusion of magma close to the surface. Twelve GPS (Global Positioning System) stations located throughout the park—accurate to within a millimeter—provide daily updates of movement in very specific locations. Another technology, InSAR (Interferometric Synthetic Aperture Radar), uses images taken from orbiting satellites to examine a broader scale. Together, InSAR and GPS provide a very detailed picture of how much the ground is moving. From this data, scientists know that the caldera is subsiding by a few centimeters per year, while Norris Geyser Basin is uplifting at a similar rate. They also know that the caldera floor has risen a staggering three feet since measurements began in 1923.

Although studying what’s happening underground from the surface is a bit like hiking in the dark, ongoing monitoring efforts and new technologies are helping paint a clearer picture of what is happening just out of sight. “We are refining that imagery, as well as our understanding,” says park geologist Jeff Hungerford. Some of that new technology is being employed at Steamboat. The geyser’s recent activity is not necessarily unusual, says Hungerford, but it does provide a great opportunity to get a closer look at the connections in Norris’s thermal system.  The University of Utah recently added 28 temporary seismic nodes to the area around Steamboat to record more subtle vibrations than the permanent stations. Scientists hope the data will give insights into connections between Steamboat and other nearby features, such as Cistern and Emerald springs, and how recent uplift in the Norris Geyser Basin might be related to these eruptions.

In another new approach to understanding the caldera, scientists are using electromagnetism to make a map of the shallow crust. Helicopters fly over the park with sophisticated equipment, bouncing a magnetic field to the surface and back. Hydrothermal fluids, clay, escaping gases, and fresh lava all have different electrical resistivity from the surrounding rocks. This imagery is used to produce maps—not unlike a topographical map—of the subsurface terrain.

Despite the exciting discoveries on the horizon, everyone still wants to know: will the volcano erupt? Geologist Lisa Morgan, at a recent public meeting with Yellowstone Volcano Observatory and affiliated scientists, answers the inevitable question: yes, but not anytime soon. “There are certainly going to be more eruptions…but we don’t see that right now in our forecast. It’s a long-lived system,” says Morgan.

Despite the fact that Yellowstone sits atop an active volcano, the activity here is normal. Mike Poland, lead scientist for the YVO says, “…it sounds very unexciting to say, but activity is relatively calm. And by calm, in Yellowstone, I mean geysers are erupting, the ground is moving up and down, and there are earthquakes every day. The Yellowstone characteristic is for it to be a dynamic place. And that’s what makes it so interesting.”

This article originally appeared in the Fall 2018 issue of Yellowstone Quarterly.