One of the most popular visitor destinations in Yellowstone National Park in 1919 was a spot called the Lunch Counter, about a 10-minute walk from the Old Faithful Inn. The newly established feeding ground for bears was described in the hotel’s brochure as a place where visitors could “photograph a wild bear and eat a course dinner in the same hour.” A century later, thanks to innovative camera collars used as part of bear management efforts, some Yellowstone bears are taking photographs of their own dinner—as well as images of park visitors—sometimes in the same hour. Photographing the feeding of black bears was common in the park until the 1960s, when sweeping changes to bear management policies eliminated hotel dump sites and cracked down on roadside handouts from car windows. But research on black bears in Yellowstone has largely stalled since the 1960s, said Kerry Gunther, the biologist who leads Yellowstone’s bear management program.

Now, the Yellowstone Black Bear Project, funded in part by Yellowstone Forever, is using field work, DNA analysis, and GPS tracking camera collars to determine black bear densities in the northern range, as well as how black bears travel, feed, and interact across the region. “We have done a lot of research on carnivores and ungulates on the northern range,” Gunther said. “The black bear is the last big carnivore that we don’t have a lot of data on. It’s the last piece of the puzzle.” 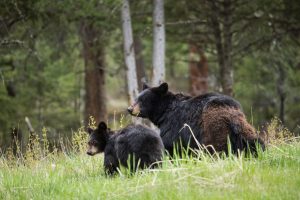 Because black bears are common in Yellowstone and well established in surrounding national forests, they have almost been taken for granted in recent decades, with park managers having only a general idea how many have home ranges in Yellowstone. About a half-dozen black bears were fitted last summer with GPS tracking collars that also capture 20 seconds of video about every 20 minutes. More bears were collared with GPS collars this summer. Batteries allow for up to two months of images, so researchers can correlate video clips of bears feeding with GPS locations of carcasses, berry patches, trout streams, and other food sources.

The videos may also yield helpful bear (and human) management insights, Gunther said, because black bears are often found along roadsides. That may be because the traffic and human presence on roads mean grizzly bears are less likely to be there. Grizzlies sometimes kill black bears in territorial or food disputes.

In fact, it was along a road near Tower Creek in June 2015 that a black bear fitted with a video collar captured what is probably the first bear-generated image of park visitors—a cluster of wildlife watchers who were photographing the bear. “We’ve gotten new insight into how bears forage on whitebark pine cones,” Bowersock told conference attendees, and videos have shown that bears “can be very precise when foraging— plucking individual berries off a plant and causing very little disturbance at some sites.”

A video from September 2014 captured footage of a black bear feeding on the carcass of another black bear following what Bowersock suspects was a fatal fight over a food source—an unexpected look at an uncommon event.

Earlier camera efforts, particularly with male grizzlies, didn’t always yield the best results, Gunther said. Many of them slept for much of the day and were active at night, when the cameras are less functional. Some grizzlies “were able to pull the collars off pretty quickly,” he said. Black bears are more active during the day, and are proving more photographically productive.

The Black Bear Project has already yielded a few unexpected results. Gunther said rubs and snares are gathering “a lot more black bear hair than grizzly bear hair,” which he had assumed would be more equally balanced. GPS readings are also showing some male black bears making longer trips than expected, including one that traveled from the Mammoth area out past West Yellowstone and into Idaho.

The bear’s-eye view gained from thousands of video clips will help researchers learn about black bears’ diet, behavior around humans, conflicts with other predators, and specific uses of distinct habitat areas. Gunther said it is important to gather baseline data on black bear densities now, so they can be compared with future findings that might help measure the effects of climate change, visitation trends, predator/prey dynamics, or other factors.

In addition to camera collars, wildlife researchers sometimes rely on photos taken by visitors to aid in their work, particularly pictures of animals with collars, ear tags, or distinctive markings. So if you get a great picture of a black bear along the roadside in Yellowstone this summer, be sure to tag and post it to social media. And be sure to smile, because the black bear just might be taking your picture too.

This article was originally published in the Fall 2018 issue of Yellowstone Quarterly.