Sometime in the 1930s, a baby’s pacifier fell into Ear Spring, a placid, ear-shaped hot pool in the Geyser Hill area of Yellowstone National Park. On September 15, 2018, Ear Spring erupted to a height of around 25 feet and the long-lost pacifier was ejected—along with a veritable time capsule of manmade debris. 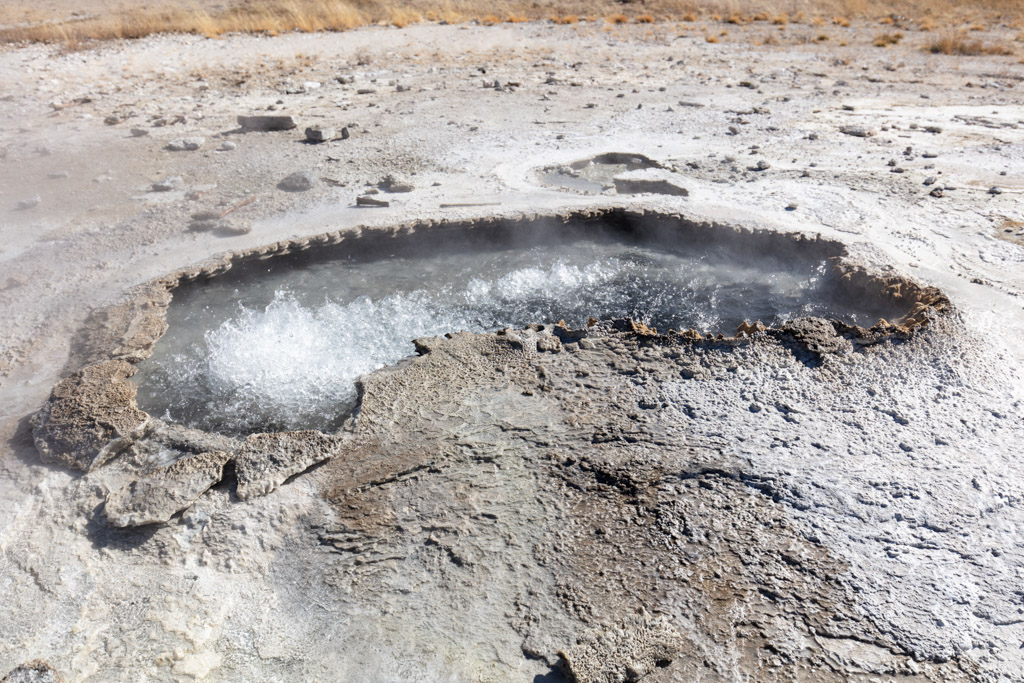 The Ear Spring eruption was part of a series of changes last summer in thermal features in the Upper Geyser Basin, including a record number of eruptions by the fickle and inscrutable Steamboat Geyser. The same period also saw the emergence of a new hot pool that prompted park officials to close portions of some boardwalks and set up new monitoring gear to ensure public safety.

As much as we might want Yellowstone to remain unchanged, a range of natural factors are always shaping the park’s landscape, including fire, erosion, wildlife, and even climate change. And the National Park Service is always responding and monitoring in an effort to keep visitors safe.

Each year, up to 2,000 feet of the park’s 15 miles of boardwalk must be removed, rerouted, or rebuilt in response to changes in thermal features, water flows, and other factors. But for longtime geyser gazers and frequent park visitors, such changes are part of the appeal in returning again and again.

“That’s one of the unique and fascinating features of Yellowstone, [things] shifting around and earthquakes rattling the plumbing system. You’re always seeing something new and getting something different,” said Terry Dolan. 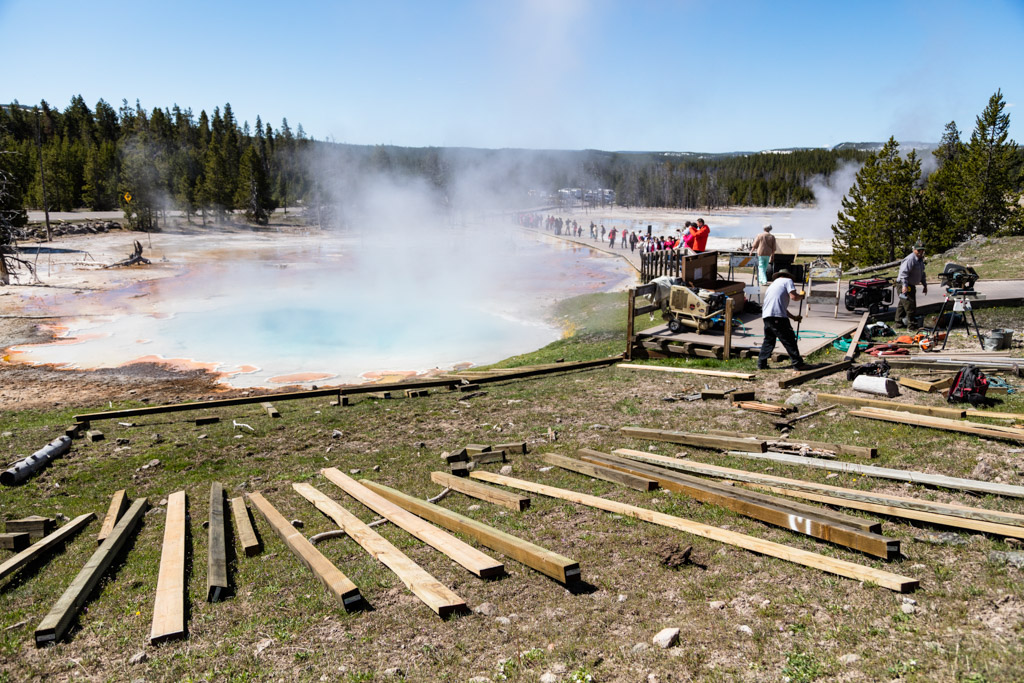 A tour guide based in Cody, Wyoming, Dolan has escorted visitors through the park on horseback, snowmobiles, and in autos for 25 years. For the past four years, he has watched as a small puff of steam in the Lower Geyser Basin has grown to a new hot spring more than three feet in diameter.

“It has been growing every year, and you wonder if it will become a mudpot or hot spring or geyser,” Dolan said. “Seeing the start of new features is really cool.”

Another new Geyser Hill thermal feature was born overnight last summer when a small, pulsing water pool emerged underneath the boardwalk west of Pump Geyser and north of Sponge Geyser. Park officials closed the boardwalk and set up monitoring gear to ensure safety and learn more about what was going on, said park geologist Jefferson Hungerford.

Park workers look for changes in ground and water temperature, rising and falling ground, and other factors that signal what’s happening in the area, Hungerford said. Geologists give any new feature time to “settle in” before deciding how close to allow the public and whether to move or build new boardwalks.

Boardwalks are built on wood footings set on the ground, because digging in thermal areas could kill existing features or create a new one, Hungerford said. (Tossing any foreign object into a feature also risks clogging or killing it.) Workers use thermal imaging and other tools to make sure routes are safe and stable, at least for the foreseeable future. 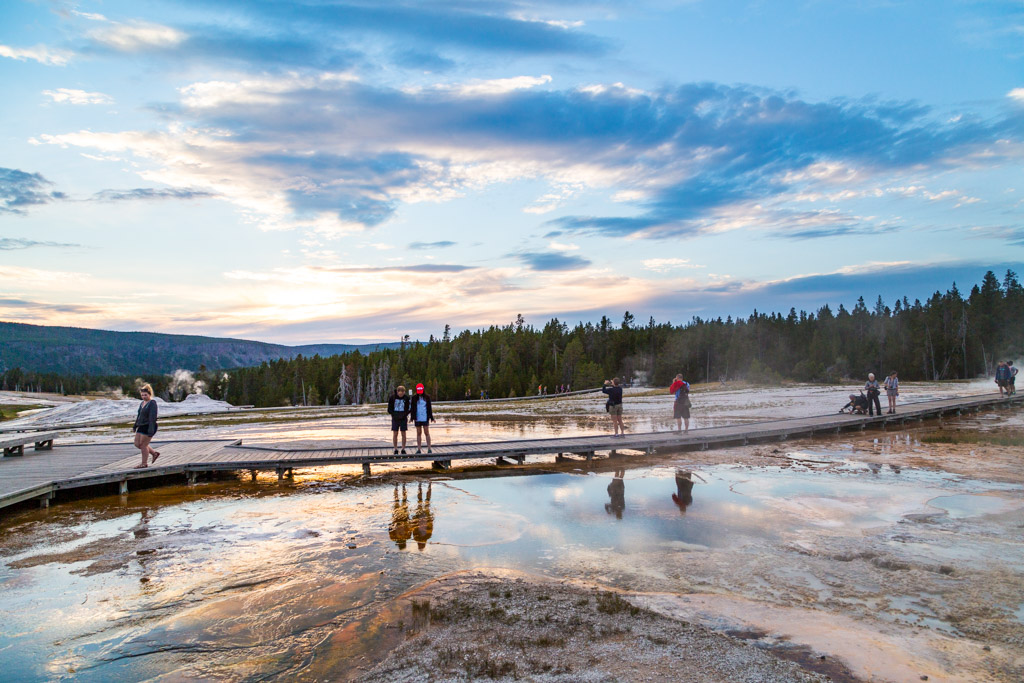 “These features are always popping up and dying, because the systems are really dynamic,” Hungerford said. But unexpected eruptions and the emergence of new features “are all within the norm,” he said. “These are dynamic and ephemeral systems. They’re going to turn on and shut off all the time as they change and recharge.”

Yellowstone experiences up to 2,000 earthquakes each year, yet only a few can be felt at the surface. But that shaking can clog or unclog underground pathways for water and steam. The shift of a small steam vent can mean vast new mineral deposits over time, or a major change in the course of flowing water.

“The easiest way to see that these are dynamic systems is to walk around Mammoth Hot Springs,” Hungerford said. “Those travertine systems are highly productive and can build new terraces in a matter of weeks.”

Park managers want to get visitors as close as safely possible to view thermal features. But with rapid and unpredictable changes being so common, it’s important for visitors to stick to established routes in thermal areas.

“We’re really lucky to have so many visitors be able to experience these systems,” Hungerford said. “But we have to be careful we don’t damage them, and that everyone stays safe. So it’s imperative that we always stay on the boardwalks and designated trails.”

This article was originally published in the Spring 2019 issue of Yellowstone Quarterly.