Did you know that Yellowstone has its own boa constrictor, or is home to a butterfly that uses antifreeze to survive the winter? Yellowstone doesn’t just protect bears, wolves, bison, and trout. While not all of the park’s residents are furry, toothy, or otherwise “charismatic,” each has an important role to play in the ecosystem. Read on to learn about some of the lesser-known—but still fascinating—species found in Yellowstone. 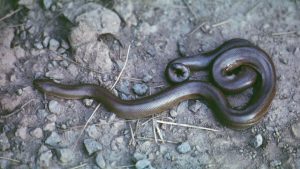 One of five snake species in Yellowstone, the rubber boa is the park’s only member of the constrictor family and is a relative of tropical boa constrictors. No longer than two feet, the rubber boa looks like an overgrown earthworm; its small scales give it a smooth, “rubbery” appearance. The snake feeds on mice, reptiles, and amphibians. Because these boas are nocturnal and like to hang out under logs and rocks, or buried in leaves or soil, seeing a rubber boa is a special treat. 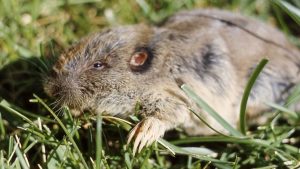 These small rodents are rarely seen above ground except in the jaws or talons of the predators that eat them. Active year-round, pocket gophers eat forbs, grasses, and stems, bulbs, and tubers, surviving over winter on vegetation they’ve stored in their tunnels. Occasionally a lucky observer may see a plant disappear underground inch by inch as a pocket gopher pulls on it from below! Come spring, their telltale “sausages”—long, spherical columns of dirt pushed out of their tunnels and into the snow—are left behind after the snow melts. 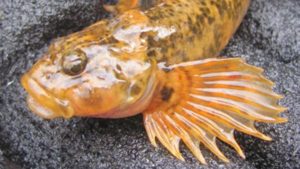 Native fish get a lot of attention in the park from anglers, as well as from cutthroat trout and arctic grayling restoration efforts. Fewer people are familiar with more diminutive natives like the mottled sculpin, found in cold, shallow streams throughout the park. “Mottled sculpins are a really cool, often overlooked native fish,” says park biologist Pat Bigelow. “They live and feed in riffles and are well-camouflaged, so they often go unnoticed.” They are an important food source for trout and have interesting spawning habits. During early winter and late spring, the male chooses a protected nest site under a rock or ledge. The female then swims in, turns upside down, and deposits her eggs on the ceiling! 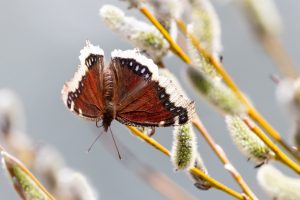 The most widely distributed butterfly in North America, you can find mourning cloaks in Yellowstone and at home. While many butterflies live only a few months in summer, mourning cloaks survive as long as 11 months, often overwintering as adults. “They fill their tissues with a natural form of antifreeze,” says Yellowstone Butterfly Count organizer George Bumann, “and then hide beneath tree bark or rock piles until spring.” Mourning cloaks are one of the first butterflies to emerge in spring, often before flowers are blooming. They eat nectar instead of sap from tree trunks. Their dark brown wings trimmed with beige resemble a traditional garment worn in mourning, hence the common name “mourning cloak.”

While pygmy owls appear small, cute, and fluffy, they are actually fierce predators. Not much bigger than your fist, they are able to kill songbirds and rodents as much as three times their size. Pygmy owls are commonly found throughout the mixed forest and open meadows of the northern range, nesting in cavities in aspen trees or snags. “Most owls are nocturnal,” says owl researcher/naturalist Katy Duffy, “but pygmy owls can be active during the day, so there’s a good chance of seeing them.” They will often perch at the top of a live tree, or anywhere on a snag. Duffy says the owl’s tail is disproportionally long and held out at an angle. “If you see something at the top of a tree that looks like a fist with something sticking out, it could be a pygmy owl,” she says. 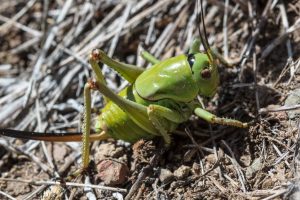 About as long as your index finger when full grown, Mormon crickets are a grasshopper-like insect found in western North American rangeland. They feed primarily on vegetation but will also eat other insects—including other Mormon crickets! While usually found in lower numbers, they sometimes travel in migratory swarms numbering in the millions. Although they can’t fly, Mormon crickets can crawl and hop 25 to 50 miles a season. Female Mormon crickets are distinguished by a long, sword-like ovipositor sticking off of their body. Close observers might be able to catch them pointing the ovipositor straight down into the ground to deposit their eggs into the soil. 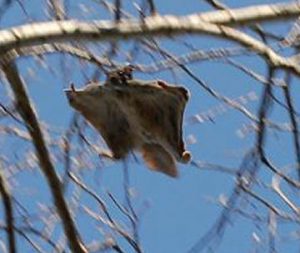 How many of Yellowstone’s squirrel species have you seen? Uinta ground squirrel, golden-mantled ground squirrel, and the American red squirrel are regularly spotted by visitors. There’s a more secretive—and seldom seen—relative of these common squirrels that also lives in the park: the northern flying squirrel. Hanging out high in the treetops of coniferous and mixed coniferous forests, flying squirrels emerge at night to glide gracefully through the trees. These squirrels don’t actually fly, but instead glide from limb to limb by using a fold of skin (called a patagium) that stretches from wrist to ankle. Flying squirrels use their flattened tail and patagium as a sort of parachute when landing, after which they scamper up a tree to avoid predators.

Jenny Golding is a former director of education for Yellowstone Forever. She currently runs the website A Yellowstone Life, and writes from her home in Gardiner, Montana, on the border of Yellowstone National Park.

All photos courtesy of the National Park Service