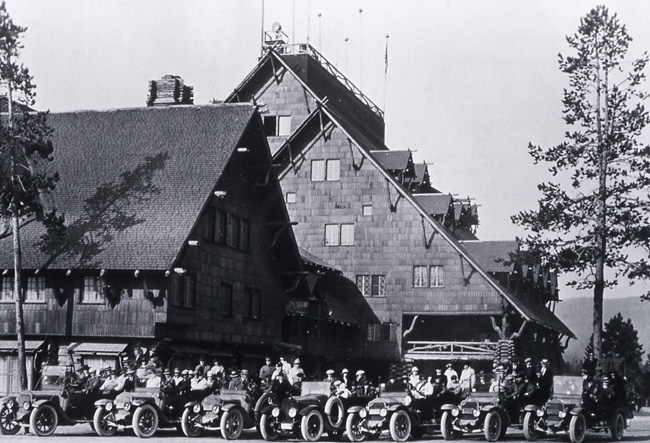 While Old Faithful Geyser and other natural features draw visitors from around the world to the Upper Geyser Basin, there’s also a legendary man-made feature that is not to be missed: the Old Faithful Inn.

The Old Faithful Inn was designed by Robert C. Reamer, who is said to have wanted the asymmetry of the building to reflect the chaos of nature. Completed in 1904 at a cost of $140,000, the enormous wood structure with its soaring, seventy-six foot tall lobby is considered a masterpiece of rustic “Parkitecture.” The hotel remains one of the largest log-style structures in the world and is a National Historic Landmark.

Here are some facts you may not know about the history of the beloved Inn:

1. The Yellowstone Volcano helped create the Old Faithful Inn. The building’s foundation and enormous fireplace were constructed from rhyolite—the rock produced by Yellowstone’s volcanic eruptions that now forms Yellowstone’s caldera. The fireplace alone is made from 500 tons of this native stone, reportedly quarried from nearby Black Sand Basin.

2. Many original fixtures and furnishings installed at the Old Faithful Inn when it first opened are still in use today. When you visit, be sure to notice the mission-style furniture and wall-mounted “candelabra” lights in the lobby, the hickory chairs and chandeliers in the dining room, the massive wrought iron and brass clock mounted on the lobby fireplace, and the red front door with its giant lock. All of these treasures have graced the Inn for more than a century!

3. On top of the Inn’s roof is a lofty lookout, referred to as the “widow’s walk,” with eight flagstaffs at its edges. At one time it flew colorful pennants and had a U.S. Navy searchlight to illuminate nighttime viewing of Old Faithful eruptions, but the light was removed in 1948. Today the flagstaffs fly the U.S.A. flag and Wyoming, Montana, and Idaho State flags, as well as four red and blue pennants that reflect the originals.

4. Evening meals in the dining room were accompanied by a string quartet, for early visitors to the Inn, and dancing was customary six nights a week. After dinner, the musicians would climb up a staircase from the second balcony and continue to play from the “Crow’s Nest,” a small, treehouse-like landing near the roof. Today, music can be heard in the main lobby each evening.

5. A printing press located in the Inn’s basement printed daily menus for each meal through at least the 1950s. Sumptuous meals were served family-style at long tables and, in the early years of the Inn, could be purchased for around 75 cents. A dinner bell mounted atop the Inn alerted visitors when it was time to come inside and get ready for dinner.

6. Every year on August 25, guests and employees celebrate Christmas in August. The tradition dates back to the 1930s when park employees celebrated “Christmas in July” with homemade ornaments, visits from Santa, and a holiday feast. By 1955, “Savage Christmas” was celebrated by employees and guests on August 25th. Today, guests are invited to trim the tree, join in caroling, and welcome St. Nick as a celebration of friendship, family, and community. 7. The August 1959 Hebgen Lake earthquake, which measured 7.5 on the Richter scale and was felt as far away as the Pacific coast and western North Dakota, damaged the Inn’s roof and chimneys. Most guests fled the Park the following day, but none were seriously injured.

8. The Bear Pit Lounge was added to the Inn in 1936, not long after prohibition was lifted nationally. Original Inn architect Reamer designed the addition and commissioned Chicago artist Walter Oehrle to etch cartoon-like bears and other animals in fir panels to decorate the lounge. When the
Bear Pit was moved next to the dining room in 1962 (the original location is now the snack bar), the panels were stored and apparently forgotten. During a 1980s restoration, they were found and five panels can now be seen adorning the walls of the relocated lounge.

9. The Fires of 1988 destroyed some small buildings nearby the Inn, and the hotel was evacuated. But the Old Faithful Inn was preserved by the heroic work of firefighters, helped by the roof sprinklers installed the previous year and a shift in the wind.

10. The original Inn, now called the “Old House,” housed 140 guest rooms, each with its own character and accents. First-floor rooms featured peeled log walls, and some rooms had cushioned window seats. When it opened, a room with a bath down the hall could be booked for $4 a night. Today the Inn has more than 300 rooms, after expansions completed in 1914 and 1927, but the 87 Old House rooms still available for rent—most of which without a private bath—are always in demand.

To learn more about how early visitors experienced the Old Faithful Inn, and get a behind-the-scenes look at its unique construction, you can take a free tour of the Inn. Tours are offered several times daily from early May through early October.

For reservations to stay at the Old Faithful Inn, contact Yellowstone National Park Lodges. Reservations open up a year in advance and it’s highly encouraged to book early. The Inn is open early May through early October.

Watch a video about how the Old Faithful Inn came to be (1 min, 52 sec)