Few times of the year are more exciting than spring in Yellowstone. As the snow recedes and new plant life springs forth, so too do Yellowstone’s baby animals. By mid-June, the park is teeming with life: Elk calves frolic on gangly legs through the tall grass; bison calves run circles around their mothers; merganser chicks swim furiously behind their nest mates; and black bear cubs scramble amidst the trunks of evergreen trees.

Yellowstone’s open valleys provide unrivaled opportunities to watch young animals. Stories of wildlife observations are passed between visitors and guides in a form of roadside oral history, like a spoken-word biology text. Here, three Yellowstone Forever instructors provide firsthand accounts from the field to illustrate the variety of survival and rearing behaviors visible in spring. 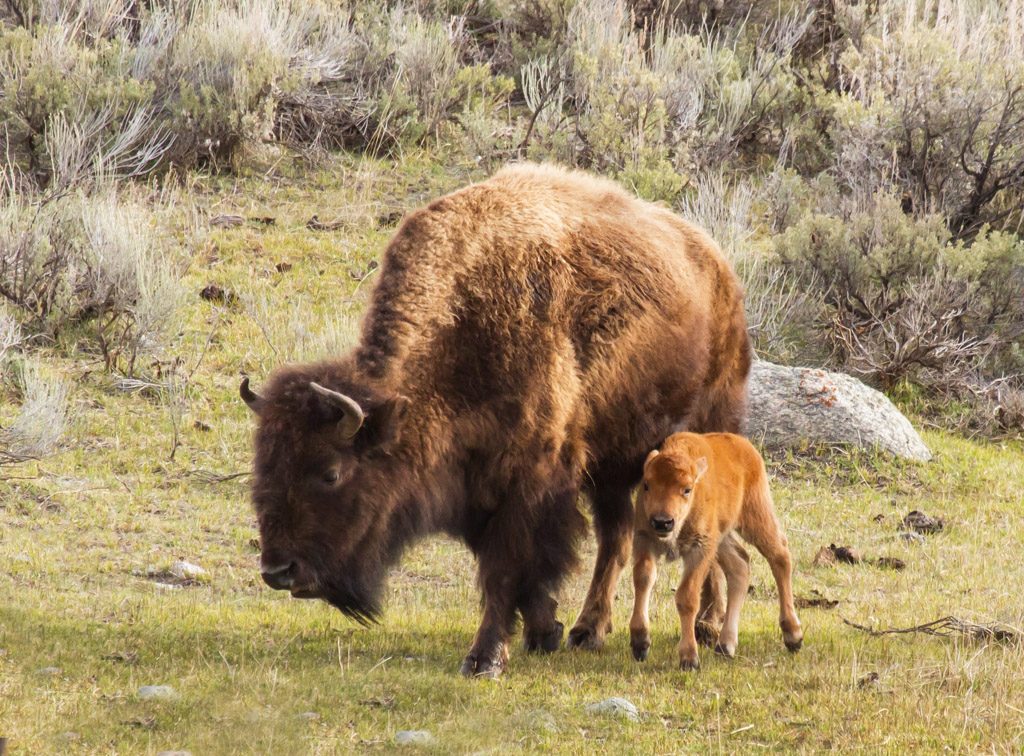 In Lamar Valley, a cow bison fends off a wolf stalking her soon-to-be newborn. “Through the spotting scope I could see two hooves sticking out, and her tail at a funny angle,” says George Bumann. “As she laid down to give birth, the wolf approached. She stood right up and sucked the calf back in to where only the hooves were sticking out again, and fended it off. This happened repeatedly over almost an hour until the wolf finally left. At last, she laid down in a patch of rye grass, and the calf was born.” Bumann timed the progression; it took the calf only 12 minutes to stand up for the first time.

Yellowstone is not an easy nursery. For ungulates, peril comes in the form of a late season snowstorm, or a toothy predator. For bear cubs it may be male bears attempting infanticide. For songbirds, it’s nest robbers or inclement weather. Baby animals have to be hardy to survive, and they are born with an array of skills to defend themselves.

Camouflage helps many ungulates—like elk, deer, and pronghorn—survive the early days. Mom will stash the relatively odorless newborn in tall grass or sage for hours each day, until it is big enough to run with the adults. Animals like bears—which account for 60 percent of elk calf mortality, according to NPS bear biologist Kerry Gunther—are lethal hunters. Being able to hide unseen until it can outrun a bear is critical to calf survival.

Coyotes are a similar threat to pronghorn fawns, says instructor Shauna Baron, causing does to be strategic in their nursing schedule. “Once you see the momma nurse, set your watch. She’ll move off 100–400 yards, but keep her chest pointed towards where the babies are laying. Around 3.5 hours later, she’ll come back.”

Bison rely more on the strength of the herd for defense, like the group Bumann witnessed ward off an attack from a pack of wolves. “As the wolves started chasing calves, the adult bison formed in behind the calves, and other adults came running in. When the calves couldn’t run any more, some bison formed a circle around them, while other adults chased off the wolves.” 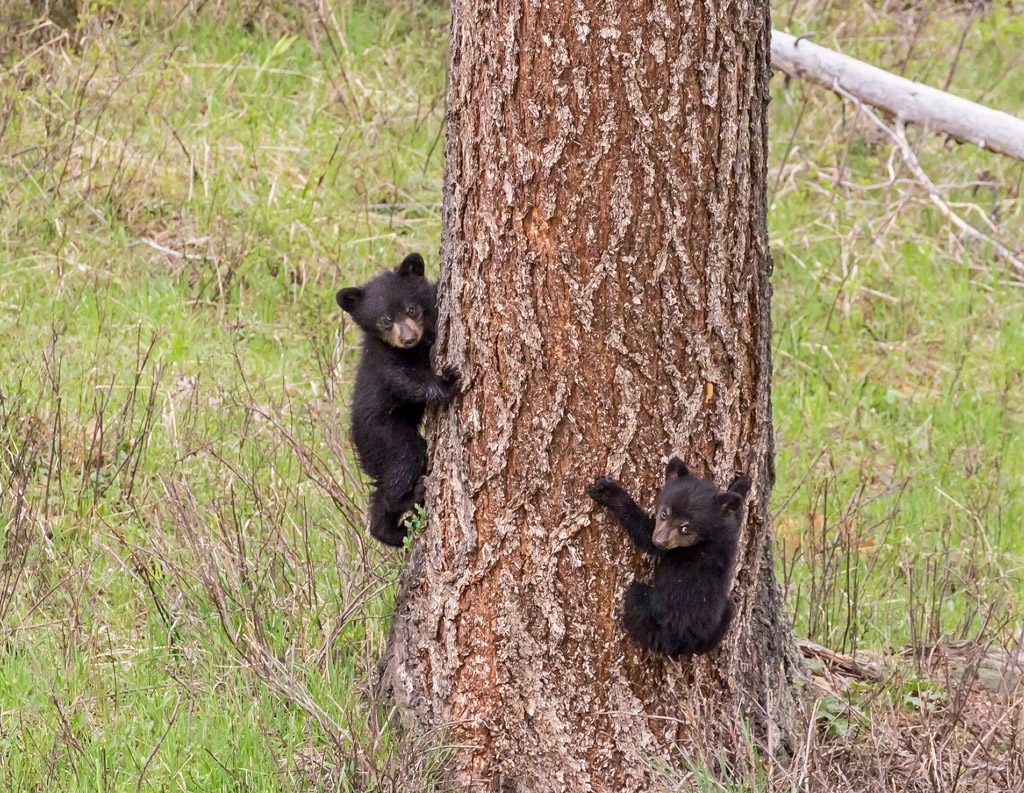 Some parents, like grizzly bear sows, rely on sheer ferocity to protect their babies. While black bear cubs can climb trees to escape a threat, grizzlies frequent more open territory, leaving them to rely on the mother’s attack and intimidation techniques for defense.

Even birds like sandhill cranes ferociously defend their young. Baron tells the story of a tenacious father sandhill who scared off a large black bear. “The sandhill ran at the bear, threw its wings up and hissed, scaring the bear up a tree. When the bear came back down, the sandhill ran down a nearby log with his wings raised like ‘Karate Kid,’ scaring the bear so much it finally ran off.” Killdeer take a more deceptive approach, like the one senior naturalist Brad Bulin observed in the Old Faithful Geyser Basin pretending its wing was broken in order to draw potential predators away from the nest.

Some species, like insects or rodents, have lots of babies at once to buffer against the inevitable losses to predators and the elements. Others, like bear and mountain lion mothers, raise small groups of young, alone. Sandhill cranes, osprey, and red fox are raised by both parents, and phalarope chicks—small shore birds found near Yellowstone Lake—are raised by the male.

Raising young takes a lot of work, says Bulin. He once watched a female coyote move her pups to a new den in response to wolves in the area. “She spent an entire afternoon carrying each of her four pups one at a time across the road, for about a mile.” That’s easily a 7- to 8-mile day. Once in a safe den, feeding a litter of pups is no easy task. “I watched a fox with four voles in its mouth, carrying them back to the den,” says Bulin. “The fox kept dropping them, and repositioning them in its mouth. When it caught another one, it just shoved it right in!” 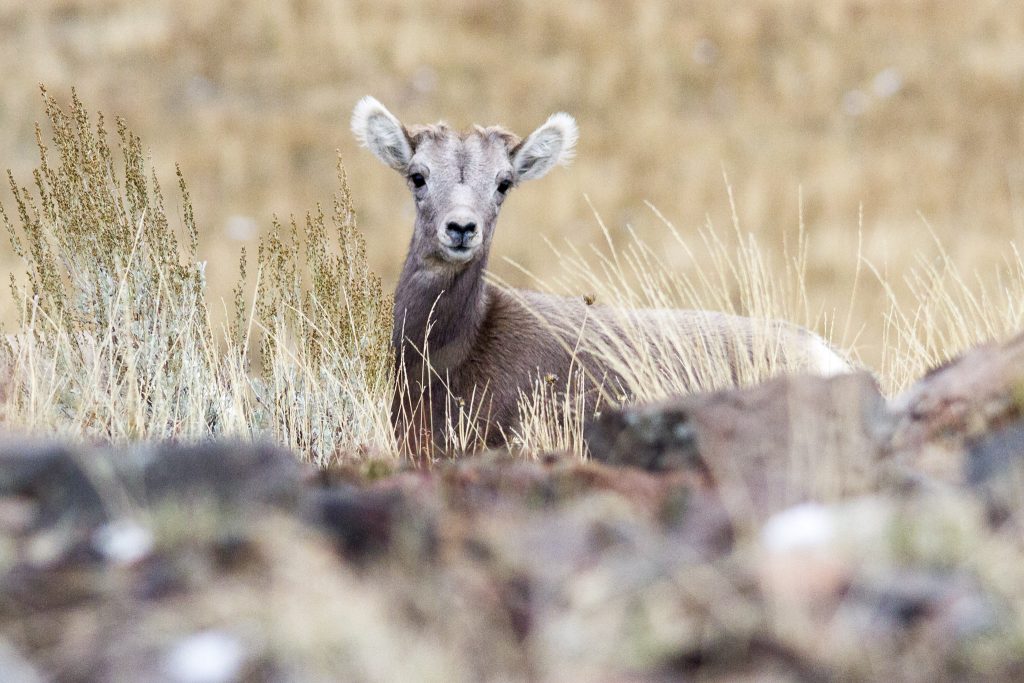 As the young grow, play is an important part of becoming a functioning adult. Bighorn sheep lambs perform daredevil stunts on steep slopes; otter pups roll and somersault through the water; and wolf pups are busy at the den practicing dominance gestures and prey-stalking behaviors.

“It’s really fun to see how adult wolves interact with puppies,” says Baron, of watching pups spend a day with their uncle while the alpha pair hunted. “It was obvious the adult wolf just wanted to take a nap in the sunshine, but the puppies kept harassing him. They were chewing on his ears, pulling on his tail, climbing up on top of him. Suddenly he would just roll over and all the puppies would tumble off, boop boop boop! He’d go back to sleep and they’d climb back on and continue their play, until he’d roll the other way and they’d all tumble off again.” The hormones prolactin and oxytocin rise in pack members when puppies arrive, giving adults a nurturing disposition. “He seemed to have all the patience in the world that day,” Baron says.

Bear cubs are notorious for play, even if their shenanigans are exhausting for mom. “Single cubs are often bored because they don’t have anyone to play with,” says Baron, of a mother grizzly and her lone cub. “This cub kept running up behind the sow and jumping on her back. Each time she would swipe at it and scold it. Finally mom gave in and decided to play, running ahead and jumping behind a big rock to surprise the cub. They repeated this until the cub got so excited it ran right at her and jumped right up on her face! Game over. Mom laid the cub down, spanked it three times, and walked off into the woods.”

Give Yellowstone’s spring babies the best chance of survival, and ensure your safety, by keeping a distance of at least 100 yards from bears and wolves, and 25 yards from all other wildlife.Survival as a young animal in Yellowstone is akin to walking a tightrope. Regardless of parenting strategy, almost all mother animals are fiercely protective of their young. It’s important to give wildlife their space, says Gunther. Getting in between a mother animal and her young, or disturbing them or blocking their path is not only dangerous for people and the animals, but can separate mother from young, leading to dire consequences for the baby.

There’s so much to enjoy while keeping a safe distance. Baron’s favorite time to enjoy spring babies is late evening. “Park where there are no people at all. Take a scope, or binoculars, sit near the vehicle or in a little spot near the road, and just enjoy the evening light, the sounds of the babies talking—especially the baby bison and their mothers.” Who knows what you might see.

Although Yellowstone’s myriad young wildlife can be viewed throughout the spring and summer, here are a few tips on ideal places and times to view some of the more popular animals.

This article was originally published in the Spring 2019 issue of Yellowstone Quarterly.