Winter in Yellowstone: Adapt or Die

Winter can be a harsh and unforgiving season in Yellowstone National Park. Heavy snow, brutal winds, and bitter cold often make the park a cruelly inhospitable place. So it’s no surprise that for wildlife like some bison and elk, or sandhill cranes and mountain bluebirds, the best option is to spend winter somewhere else.

But for animals that can’t easily migrate from Yellowstone to friendlier habitats, the only winter survival strategy is to adapt or die. 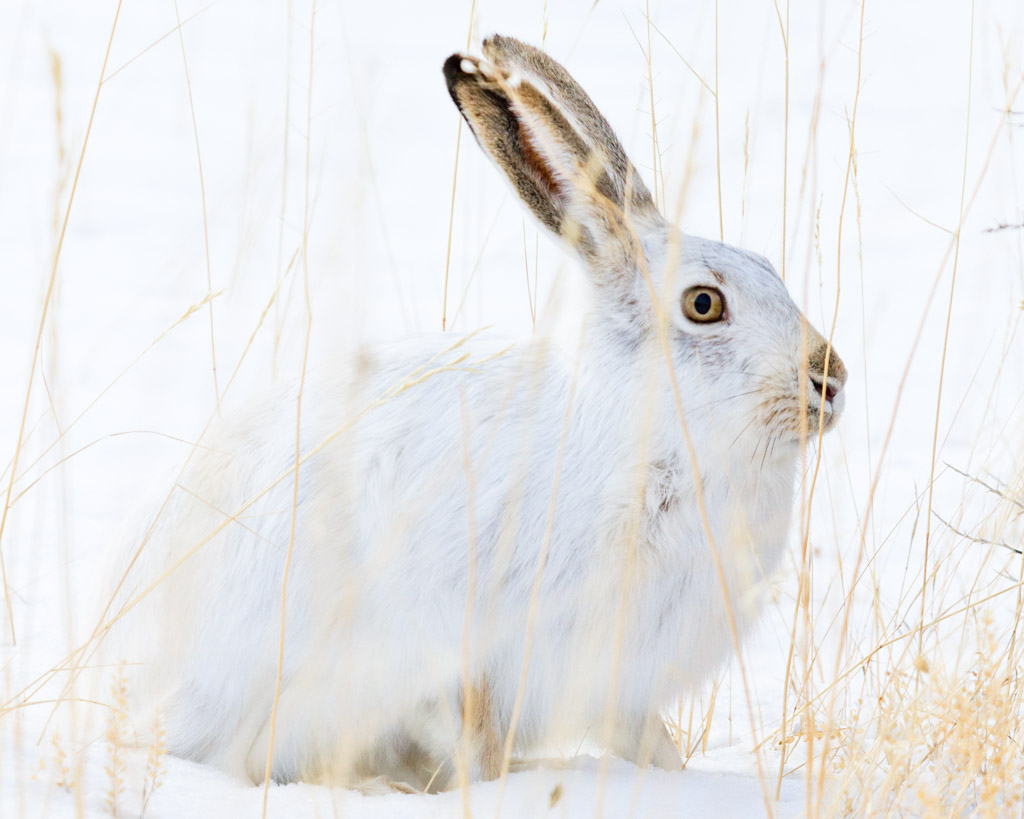 Those winter adaptations can be seasonal and readily apparent, like a white-tailed jackrabbit’s coat changing from grayish brown to nearly white. But they can also be tougher to spot, like the circulatory systems in duck feet or beaver tails.

Nature has devised an array of clever tricks for surviving the cold, and Yellowstone is full of wildlife that take advantage of a wide range of winter adaptions. Grizzly bears and black bears are famous for hibernating, while red squirrels and pika are known for caching food for winter.

The most visible adaptation is the seasonal camouflage adopted by snowshoe hares and short- and long-tailed weasels. Those animals’ coats turn mostly white to help them hide against the snow, making it easier to evade predators and catch prey, said Rebecca Roland, a supervisory park ranger at the Old Faithful Visitor Education Center.

The change in fur color may have first evolved primarily to enhance insulation, because hollow white hairs contain air instead of pigment. Regardless, the color change now occurs in response to the changing hours of daylight in spring and fall. Because weasels are prey to raptors and other predators—but also prey on squirrels and gophers— the seasonal camouflage switch is critical.

But climate change is bringing later snows and earlier spring melts, throwing the seasonal wardrobe change of weasels and snowshoe hares out of sync. Some research indicates hares are becoming more vulnerable to predation as a result of climate change, because they are turning white before full snow cover and remaining white after much snow has melted in the spring. 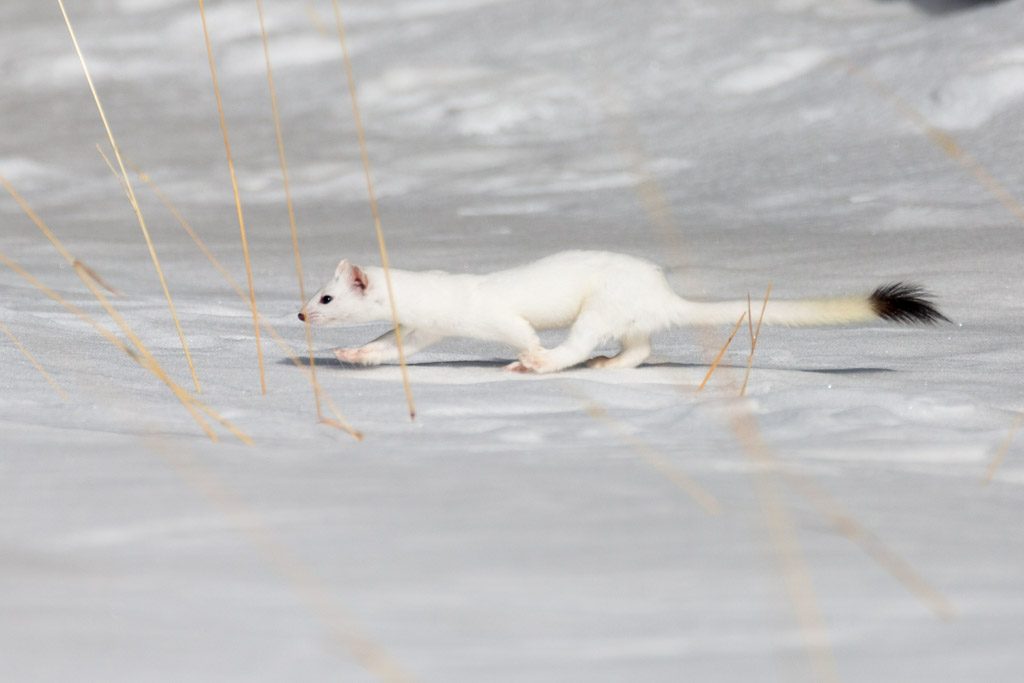 Climate change may also be complicating winter for ruffed grouse, said Doug Smith, senior wildlife biologist for Yellowstone. The birds dive into soft, fluffy snow to insulate themselves and take cover from predators. But winter thaws and re-freezes can create thick crusts on snow fields, inhibiting their burrowing and leading to higher grouse mortality.

Another bird that winters in Yellowstone seems unlikely to survive a single sub-zero day, but stays alive by employing multiple adaptations, Smith said. Golden crown kinglets are among the world’s smallest nesting birds, weighing about the same as two pennies. Such a small animal wouldn’t seem to be able to retain enough body heat to survive sub-zero nights.

“But every night before dark, they go into a feeding frenzy to put on fat that gives them energy to burn through the night,” Smith said. Kinglets also cluster together at night to conserve body heat, and allow their body temperatures to drop several degrees, so they burn fewer calories. Finally, to avoid losing heat through their feet, they employ countercurrent heat exchange. It’s an adapted circulatory network that allows their feet to stay very cold, but just warm enough to avoid tissue damage. 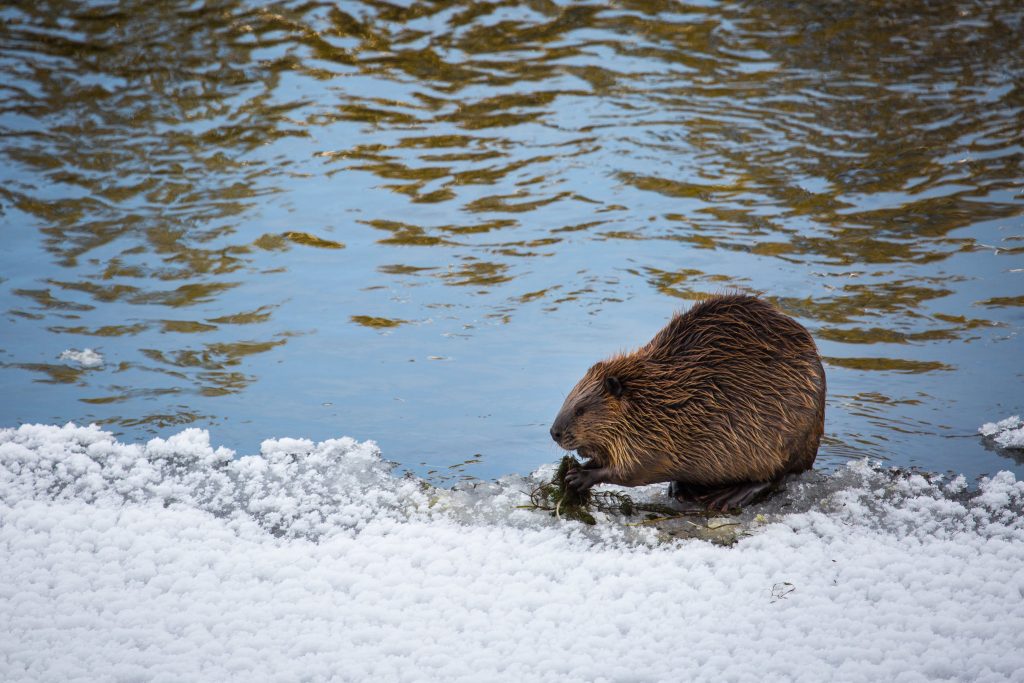 Ducks and geese use countercurrent heat exchange in their feet, and other animals also employ the adaptation, including beavers, who use it to keep their tails from freezing. “Beavers are masters at winter adaptation,” said Smith, who is best known for leading the reintroduction and management of gray wolves in the park, but who also studied beavers earlier in his career.

Beavers dig dens or build lodges along rivers, where they create pockets of relatively warmer air. And because their pelts are excellent at keeping them dry, beavers can swim comfortably in water that may be cold by our standards, but is still much warmer than below-freezing air temperatures.

Beavers are also relatively safe from predators in their dens and beneath the ice. But wolves are known to find spots where ice is thin or gone, and wait for beavers to surface. So once again, climate change may be further altering the survival odds in Yellowstone, because “warming temperatures mid-winter mean more dead beavers,” Smith said.

Like beavers, wolves have winter coats that are amazingly well-adapted to the cold. Outer guard hairs shed water and protect against wind, while a thick, dense layer of underfur insulates amazingly well, he said.

Smith recalls bringing in the first wolves from Canada for reintroduction to Yellowstone in 1995. They were held in metal shipping crates overnight at temperatures of –35 degrees Fahrenheit. 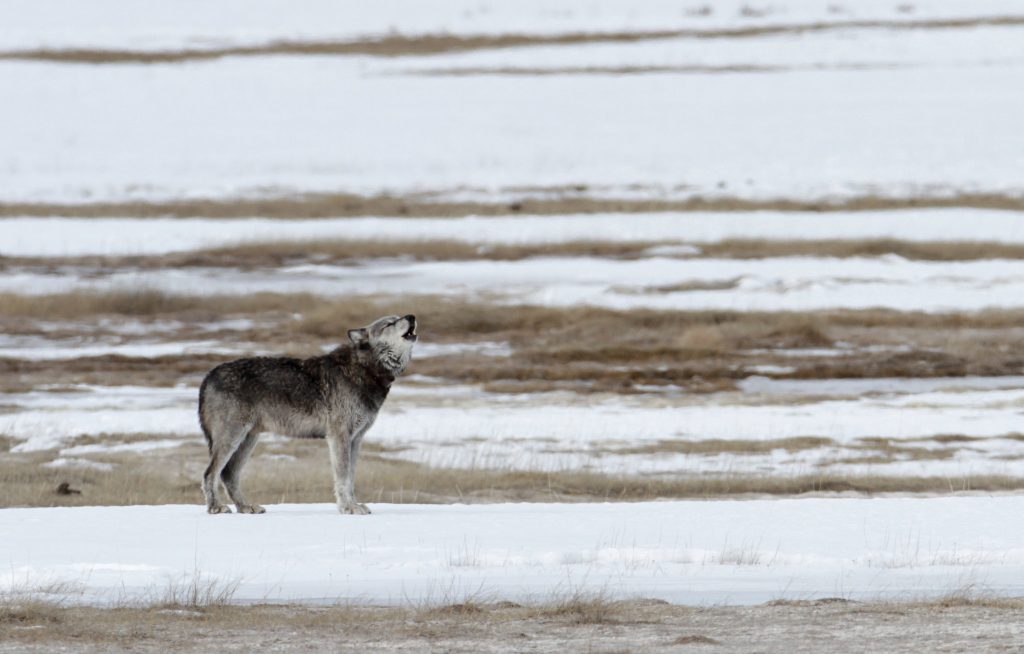 “They showed no ill effects,” he said. “In fact they seem perfectly happy at –50. I don’t know if they’ve found a temperature yet where a wolf will shiver.”

But like the color-changing weasels, wolves’ amazing coats undergo a seasonal change for warm weather that is surely familiar to most any dog owner.