A Race Against Time

The Greater Yellowstone Ecosystem is home to the largest concentration of wildlife in the lower 48 states. But a dangerous threat to the ecosystem and its inhabitants lurks deep beneath the surface of Yellowstone Lake: lake trout. Below are answers to some of the most frequently asked questions about lake trout in Yellowstone. Find out why the presence of this non-native fish is such a tenacious problem and—five years after escalating the removal effort—what progress is being made.

Why is the presence of lake trout such a big problem? 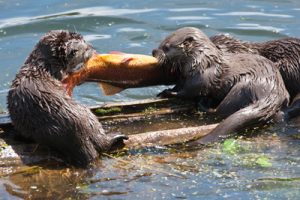 Lake trout are predatory. One mature lake trout can eat approximately 41 native cutthroat trout per year. They threaten the survival not only of the cutthroat but also the many species that depend on the native trout, including grizzly bears, osprey, otters and bald eagles.

Most predators can’t catch lake trout as a substitute food source, because these trout live in deep water and are quite large. So the lake trout have no natural predators in the park’s ecosystem, and can potentially live to their 30s and 40s in Yellowstone Lake if they are not removed by netting. The life span of cutthroat is typically 10-12 years.

By the early 2000s, just a few years after the first lake trout was discovered in Yellowstone Lake, there was evidence that the cutthroat trout population was on the decline. By 2008 the cutthroat were in a very bad state. For comparison, the population of cutthroat trout in the late 1970s was estimated at around 3.5 to 4 million fish. The low was estimated to be in the mid-to late-2000s at merely 5-10% of the numbers in the late 70s, roughly 500,000 fish.

If lake trout aren’t native to the park, how did they get into Yellowstone Lake?

A lake trout was first discovered in the lake in 1994 by a fishing guide boat that was out with clients. They brought the fish to rangers to be examined, prompting the park to start netting in the area and subsequently finding more. The microchemistry was examined from some of the fish, and they were found to have come from Lewis Lake, near the park’s south entrance.

The U.S. Fishing Commission intentionally introduced lake trout to Lewis Lake in 1890 from Lake Michigan. Federal agencies, including NPS, used to stock fish for sport-fishing reasons, without much attention to the consequences. It is possible that someone brought lake trout from Lewis Lake to Yellowstone Lake, but we will likely never know for sure.

What is the Park Service doing to save the cutthroat trout? The primary activity of Yellowstone’s Native Fish Program is removal of the lake trout from Yellowstone Lake, and this is the seventh year in a row of aggressive netting efforts on the lake. Gill nets are used for this process: panels of net extend upward from the bottom of the lake about six to eight feet high and for many miles. These nets are lifted twice a week, pulling and killing lake trout.

A private, contracted fishing company, Hickey Brothers, does almost all of the netting operations. They have a lot of experience, including nine years on Yellowstone Lake, during which they have helped refine the process to be more efficient. Four large boats with captains and crews work six days a week to aggressively seek and remove the lake trout. On any given day during the May-October netting season, some 30-40 miles of net are set in the lake. Ironically, lake trout in the Great Lakes, where the Hickey Brothers learned to fish them, are now in trouble from an invasive species there. Is Yellowstone making any progress in eliminating the lake trout?

Yellowstone National Park and contract crews removed 282,960 fish between May and October in 2019 compared to 297,110 in 2018, and 396,950 in 2017, a 29% decline over three years.  Additionally, the catch of large adult fish continues to decline dramatically each year. These are likely indicators that the lake trout population is on the decline, which is great news for the native cutthroats.

Gillnetting has removed over 3 million lake trout since 1994, of which roughly 2 million have been removed over the past six seasons, during the period Yellowstone Forever has supported the increased effort.

How do we know the efforts are working to increase the cutthroat populations?

All indicators—such as an increase in spawning fish in tributaries, a three-fold increase in juvenile fish within the lake, and higher catch rates by cutthroat anglers throughout the lake ecosystem—are all strong evidence that cutthroat trout numbers are up. Angling on the lake has been increasingly good over the last five years, especially after spring thaw. However, despite the massive removal effort, lake trout are still in Yellowstone Lake in large quantities, and NPS employs adaptive management to continue to improve the approach. All of the data collected is put into models, which are then reviewed by a scientific panel each year to help better understand the present situation and inform decisions for future years.

Will all the lake trout eventually be removed?

The National Park Service knows they will never get all of the lake trout out of the lake, so the goal is to “crash” the population so that cutthroat can continue to increase their presence.

To complement the gillnetting, other suppression efforts will help maintain low levels of lake trout. Recently, the placement of lake trout carcasses over the spawning areas has proven to be an effective method of killing the lake trout eggs.

What happens to the lake trout after they are caught and killed? The lake trout that are killed each summer are returned back to deep areas of the lake, thus putting those nutrients back into the ecosystem. Most of the fish caught have been dead for days by the time the nets are pulled in, and are not edible.

How is Yellowstone Forever involved in the Native Fish Program?

Yellowstone Forever supports this priority park program by raising annual funds to help cover expenses. This is the seventh consecutive year that Yellowstone Forever has contributed $1 million to the Native Fish Program, and this donation is being matched dollar for dollar by federal funds.