Note: While the park is closed, Yellowstone National Park is offering the Yellowstone Junior Ranger program booklet (7.1 MB PDF) online for you to download and complete at home. See the park’s website for full details and activities.

For nearly nine decades, some form of Junior Ranger program has been feeding that ambition among young visitors, offering a chance for kids to forge a deeper connection to nature, and explore more of what it’s like to be a steward of extraordinary public lands. 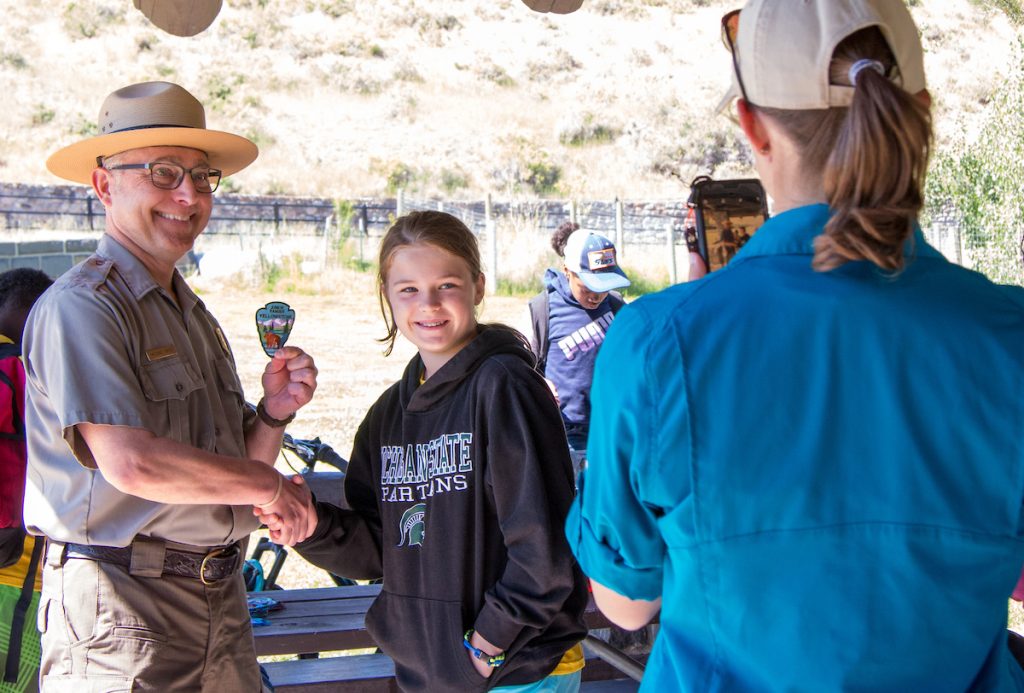 “The program is a tool for kids to engage with the park, and because there is such diversity and variety in Yellowstone, everyone’s experience is a little different,” Taylor said. “We also get many adults that really find it’s one of the quickest ways to learn about the park.”

Grand Canyon National Park visitor Rose Torphy made headlines in February when she became that site’s oldest Junior Ranger at 103, which is three years older than the park itself.

Junior Ranger programs have their roots in the Yosemite Junior Nature School, launched in June 1930, according to The Ranger Archivist, a blog maintained by former Yellowstone archivist Francis Shawn Bawden.

In Yellowstone, a junior nature explorers program started in 1947. Ranger naturalist Mildred Ericson wrote that year about how kids 6–14 took “special exploring trips” and followed “a treatment of nature lore with some work being done on nature craft.” Program activities in August 1947 included visiting beaver dams near Mammoth Hot Springs, “where we studied the habits of the beaver, hypnotized frogs, and observed a herd of antelope.”

The earliest version of today’s Junior Ranger program appears to have started in Yellowstone in 1984, said Tammi Corchero, the current program coordinator.

Participants pick up a Junior Ranger activity booklet at National Park Service visitor centers located throughout Yellowstone and follow programs geared for ages 4–7 (earning a geyser patch), 8–12 (earning a grizzly bear patch) and 13 and up (earning a bison patch). While many national parks give out a plastic or wooden badge similar to a National Park Service ranger’s badge, Yellowstone has opted for patches, Corchero said.

“The different patches are a way to make it more pertinent and specific to Yellowstone, and the kids are excited about the different designs and colors,” she said. Patches are also easier to mail to participants who complete their booklets and later mail them in.

To earn their Junior Ranger patches, kids must explore the park on a trail or boardwalk, attend a ranger-led program, and perform other activities. It encourages them to “spend a little bit of time in the park with people who dedicate their summers or even their lives to protecting and sharing Yellowstone,” Taylor said.

“A lot of kids are really excited to do the program, and there’s also a lot of anticipation and pride when they finish,” she said. Successful participants take the Junior Ranger pledge and have a ranger review their materials before being awarded the arrowhead-shaped Junior Ranger patch.

For Kristina Chaffin, a real estate agent from Littleton, Colorado, the Junior Ranger program is a fun way to get her two daughters more deeply engaged in the national parks the family visits. When touring Yellowstone a few years back, Brooke, then 4, and Sydney, then 7, were interested mainly in wildlife, Chaffin said. She used the program book to “basically build my own junior ranger program” around their interests.

“It’s always fun to do the programs, and the kids learn a lot,” she said. “It’s a really good way of engaging the kids with the rangers to go ask extra questions about those things that always come up. They can find additional answers that way.” Chaffin said her older daughter was interested in different kinds of thermal features, “and the program had us go and seek out a mudpot, which is one kind we hadn’t seen before, so she was excited about that.”

Corchero said she has seen many kids who have completed Junior Ranger programs at dozens of parks, collecting and proudly displaying their badges and patches from around the country. But even first-timers often show an infectious enthusiasm for the program. “When kids come in with their books completed, they’re really excited to share with us something they saw or learned,” she said. “You can see in their faces what those experiences mean to them, and you know they’ll carry it with them for a long time.”

This article was originally published in the Summer 2019 issue of Yellowstone Quarterly.