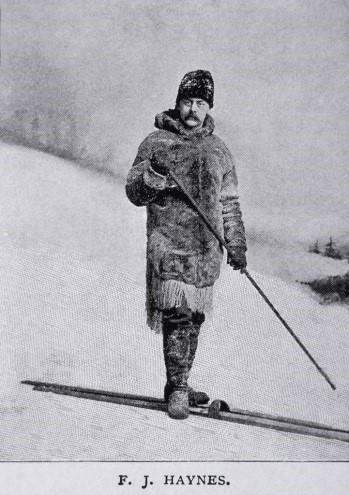 Frank Jay Haynes is known for his photographic legacy in the park, but his first winter expedition nearly put an end to that. Yellowstone National Park was a wild and remote place in the late 1800s, and in winter it beckoned only the heartiest, most adventurous souls. Renowned photographer Frank Jay Haynes was certainly one of those bold explorers. At a time when photography required hauling heavy equipment and chemicals to develop photos in the field, Haynes took the first known winter photos of the park during an epic, 29-day, 200-mile ski and snowshoe trip.

The date was January 5, 1887, when Haynes set out with arctic explorer Frederick Schwatka and 11 other guides, pulling sleds laden with their gear. The group traveled from Mammoth to Norris in two days, but the altitude affected Schwatka, and he abandoned the tour. Haynes and three other guides decided to continue on and visit both the lower and upper geyser basin and Yellowstone Falls.

That’s when things got bad.

In an attempt to reach Yancey’s Pleasant Valley Hotel from Canyon, the party became stranded for three days on the slopes of Mount Washburn in a blinding, frigid snowstorm. With scarce food and shelter, the group nearly died. Once the weather cleared they did finally make it to Yancey’s, where they recuperated before returning to Mammoth. When all was said and done, the group traveled nearly a month and covered 200 miles, during which the temperatures varied from -10 degrees to -52 degrees below zero. But perhaps the biggest feat: Haynes returned with 42 winter photographs – the first ever taken in the park during that time of year.

Small wonder that a man of Haynes’ resolve went on to create a legacy of photography in Yellowstone. He and then his son, Jack Ellis Haynes, ran the photography concessions in Yellowstone from 1884 to 1968, taking and selling their own photos of Yellowstone in their shops, and developing photos taken by park visitors.

An astute businessman, F. Jay Haynes as he came to be known, began producing postcards in 1899. Now collector’s items, the postcards, called “penny postals,” were photos hand-tinted by artists. They allowed customers to write a message and send a photo at the same time for a penny. Jack took over the family business in 1916, and Haynes Inc. continued publishing postcards until 1966. A hard and innovative worker himself, Jack was known for offering overnight photo developing services. Tourists could drop their film off at the Haynes Picture Shop in Mammoth and pick up the developed photographs the next day! He even prided himself on his employees’ overnight courier service, delivering visitors’ photos wherever they were staying in the park.

Haynes’ photographs of the park spread worldwide and could be seen anywhere from Atlantic steamers to resorts in Europe. These iconic photographs were used to promote western tourism, and helped Yellowstone gain international recognition for its natural wonders and unique beauty. 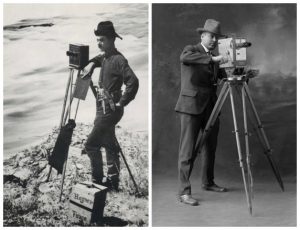 Photos from top to bottom: Frank Jay Haynes during 1887 winter expedition (Photos from Wikimedia Commons/public domain); Haynes and party make it to Yancey’s Pleasant Valley Hotel after nearly perishing in a snowstorm; Elk in Deep Snow; F. Jay Haynes and son Jack Ellis ran the photo concession in the park from 1884 to 1967.