Most park enthusiasts know a thing or two about how Yellowstone’s more visible animals survive winter, but what about the smaller creatures that also have a lengthy season to endure? Yellowstone is home to the largest concentration of mammals in the lower 48 states, and more than 60 different mammals live there – many of them smaller and less visible.

The family Mustelidae are remarkably fierce carnivores commonly known as the weasel family. Of the 57 species of mustelids, Yellowstone is home to eight of them including badgers, fishers, marten, mink, river otters, long-tailed weasels, short-tailed weasels, and wolverines. Worldwide, the various species share some characteristics, but also vary greatly. For example, the least weasel is not much larger than a mouse, while giant otters can measure up to 7.9 feet in length. 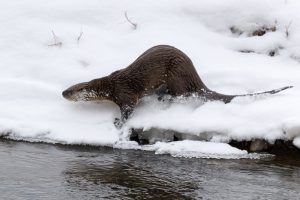 “Badgers, martens, and weasels are the most common mustelids seen from park roads,” says Kerry Gunther, YNP bear management biologist. “River otters are frequently seen, but not as often from roads – they usually require a short hike.”

Gunther notes that fishers are the least likely to be spotted anywhere in the park, while wolverine are also rare and have a very limited distribution – a fact that prompted a Yellowstone Forever (then the Yellowstone Park Foundation) funded Wolverine Conservation Study in 2008. In fact, the U.S. Fish & Wildlife Service recently proposed wolverines for threatened species status.

The wolverine diet is unique in that it includes scavenging of mostly large animals like mountain goats and elk. This is in contrast to river otters, which according to Gunther are specialists that eat “mostly fish, but also crustaceans, insects, amphibians, and birds.” 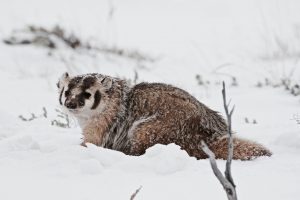 Weasels are active all winter long, despite the fact that they commonly lack the impressive body fat stores that other mammals active in winter rely on. Long and short-tailed weasels, both of which turn from brown to white in winter, have a resting metabolism that is often twice that of other animals their size. Because of this, they have to eat more food per day than other winter-adapted animals, according to Bernd Heinrich, author of the book Winter World, The Ingenuity of Animal Survival. Heinrich writes that these weasels need to be small and skinny to enter a rodent’s tunnel (one of their main food sources), and balance their energy needs with their behavior. “Radio tracking studies show that most of their time in a typical 24 hours in winter is spent eating and resting,” says Heinrich. “Weasels need no permanent den, nor do they need a large stomach, because after reaching the rodent nest they use their victim’s nest for their own and curl up into a ball to conserve energy while feeding about 5 to 10 times per day. After finishing their meal and again in need of energy supplies, they sally forth on their next hunt.”

Keep an eye out for this interesting and diverse family of mammals the next time you visit the park. And for an overview of the many wildlife-focused programs Yellowstone Forever supports, please visit our Wildlife, Wonders, & Wilderness web page to find out how you can help protect and preserve Yellowstone’s mammals.