In the pre-dawn light of winter, you hear a low howl. Anticipation rises as you look through the spotting scope, hoping to get a glimpse in the dim light.

The sun breaks through the clouds, making shafts of sunlight on the valley floor. You spot them! The entire pack is lined out single file across the valley. One…two…seven…twelve…. As they shift in and out of patches of light, you can see the wind fluttering through their guard hairs and the snow flying off their paws. They are heading straight towards a herd of elk. You hold your breath, but they keep going, topping a nearby ridge. You’re left with the prickly-numb feeling that comes from a brush with wildness—and questions: Why didn’t they chase the elk? Was that the alpha pair in the lead? Where are they going? 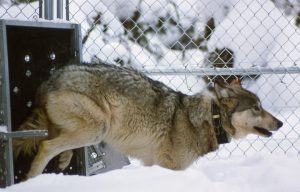 In the winter of 1995, the first howl of a wild wolf pack in more than 70 years echoed in Yellowstone, the culmination of a long effort to reintroduce wolves after they were extirpated from the park in the 1920s. Between 1995 and 1997, 41 wolves were relocated from western Canada and northwestern Montana to Yellowstone, in one of the greatest wildlife restoration stories of our time. As of December 2019, 93 wolves in eight packs had territories in Yellowstone. 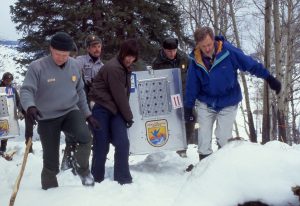 The return of wolves to Yellowstone offered a new opportunity for people from across the globe to experience and study a wild, intact ecosystem. Yellowstone provided an unprecedented window into the lives of wolves, a second chance to understand and reevaluate our relationship with large carnivores, and the means to solve some of the mysteries of their kind. 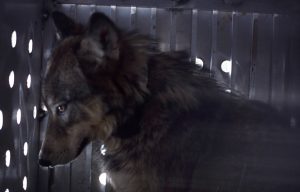 Would you have guessed that the color of a wolf’s coat could be linked to how many pups it has, or how long it lives? Or that the nesting site of a Wilson’s warbler could hinge upon the actions of wolves?

The Yellowstone Wolf Project is approaching a remarkable 25 years of research data, obtained from an annual winter behavior and monitoring study. That data, along with a long-term summer study that tracks wolf kills, and blood samples obtained from wolves, has afforded scientists new discoveries previously unattainable.

To date, 85 scientific publications, 3 books, 22 book chapters, and 27 technical reports have been published by the Wolf Project staff. Add in works by other scientists, universities, popular publications, and filmmakers, and wolves in Yellowstone have inspired thousands of scientific and popular narratives.

What have we learned about wolves?

Doug Smith, Yellowstone’s senior wildlife biologist and Wolf Project leader, has been there from the beginning. He says foremost we’ve learned that restoration—even of a controversial species—can work. “You can take a disturbed ecosystem…and restore the original inhabitants and undergo ecological restoration,” he says. 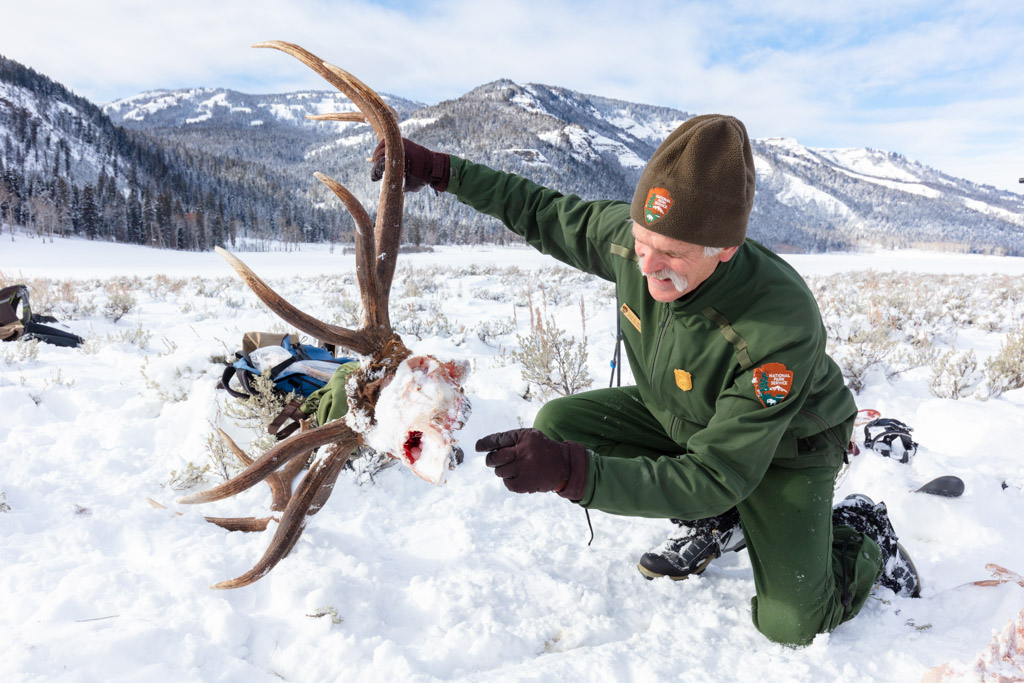 Here Smith is referring to the idea of “trophic cascade,” where wolves indirectly impact the growth of vegetation by affecting the behavior of their plant-eating prey, creating a cascade of effects on plants, birds, and other species. He emphasizes that how exactly wolves contribute to those effects is an ongoing scientific debate.

Researchers have found that younger wolves (two- to three-year-olds) are the best hunters, but older, more experienced wolves are critical to surviving attacks from other packs. Larger packs are better for defending food and territory, cooperatively raising pups, and surviving if a wolf is sick or infirm; but finding food for everyone is more difficult. Not all packs consist of a monogamous alpha pair leading a pack of non-breeding wolves; 25 percent of packs in Yellowstone have multiple females that breed each year. Blood samples have shown that diseases like canine distemper virus can reduce the wolf population up to 30 percent, and cause pup survival to plummet. 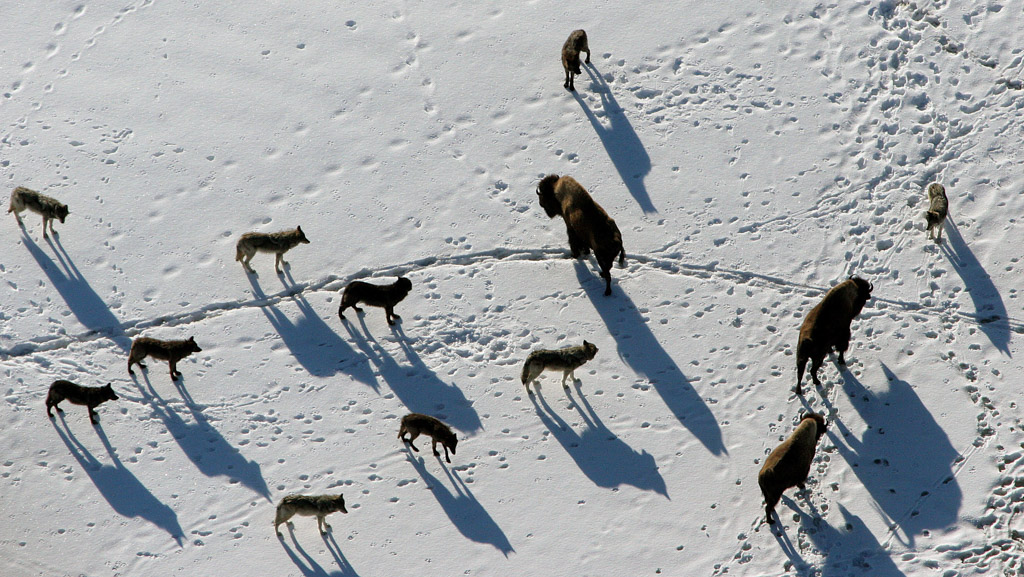 The project has busted some myths, too, like the idea that wolves are the perfect predator. Hunting elk and bison is a dangerous business. “Everything from their body design to their risk-averse behavior, to the challenges of walking up to an animal five times your size with just your mouth and pulling it down and killing it,” says Stahler, “are limitations to their success.”

Genetic research is another exciting frontier. Complex family trees and DNA studies help shed light on which traits influence survival, how wolves evolved, and even the origin of black coat color—a gene traced back to old-world domestic dogs that plays a role in disease resistance and longevity, among other things.

These are just a few examples of the layers of new understanding about wild wolves.

What does the future hold?

Knowing how a natural population behaves is important for understanding the impact of human actions in other places. Yellowstone is currently part of a study of several parks—including Denali, Grand Teton, and Yukon Charlie in Canada—to better understand the impacts of hunting and human management on wolf populations.

Smith believes social science is key to fostering a positive future for wolves. The relationship between wolves and people is fraught with conflict. Wolves have been delisted and relisted as an endangered species multiple times in an ongoing debate about how to manage them outside the park. A robust wolf-watching community contributes significant economic benefit to local communities and provides a strong constituency for wolves. Outside the park, wolves still incite strong negative feelings in many whose livelihood depends on elk hunting or raising livestock. Social science is needed to better understand the human dimensions of wolf management. 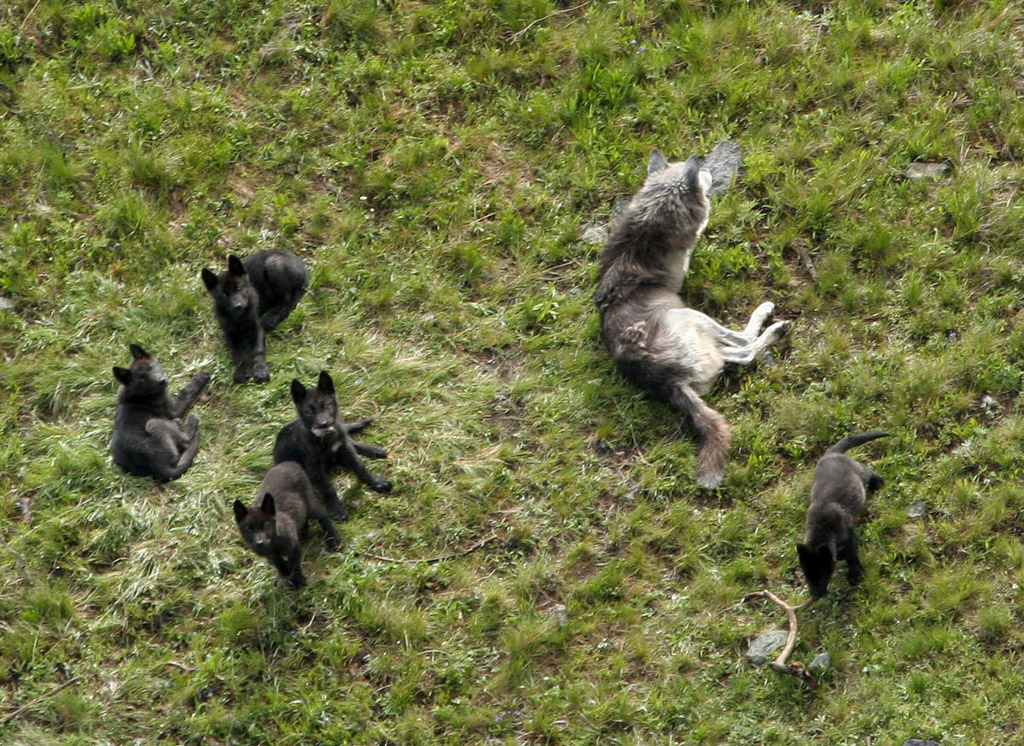 This is part of why the Yellowstone Wolf Project will remain committed to educational outreach, from in-park Wolf Project staff who interact with visitors, to public presentations (Smith provides around 50 programs annually). A new book, Yellowstone Wolves: Science and Discovery in the World’s First National Park, due out through the University of Chicago Press in 2020, will share what the park has learned with a broader audience.

Back in the park, the wolves have crossed the ridge out of view, ignoring the doings of humans. Yet wolves hold a critical place in the future of wild places. The opportunity Yellowstone provides to see and experience them as well as learn about their biology and behavior gives us new perspectives and pathways to coexistence—for the next 25 years and beyond.

To learn more about the Yellowstone Wolf Project and how you can help, visit Yellowstone.org/wolf-project.

This article was originally published in the Spring 2020 issue of Yellowstone Quarterly.