Ravens and wolves have a special relationship. Called “wolf birds” by various cultures, ravens have important ties to wolves. Like many scavengers, the common raven (Corvus corax) is especially tied to large predators that serve as potential food providers. Wolves provide many Yellowstone species a year-round food not necessarily available prior to their re-establishment in the park: carrion. Bears, eagles, magpies, and several other species also benefit from this food source.

Ravens begin eating carrion quickly, usually arriving not soon after a kill, but rather—because of their close association with wolves—being there when the kill is made. As many as 135 ravens have been seen on one carcass! Interestingly, these birds will not only eat some of the food, but cache (store) as much as possible. It is believed that in some cases the raven, not the wolf, will harvest the majority of a large animal carcass. 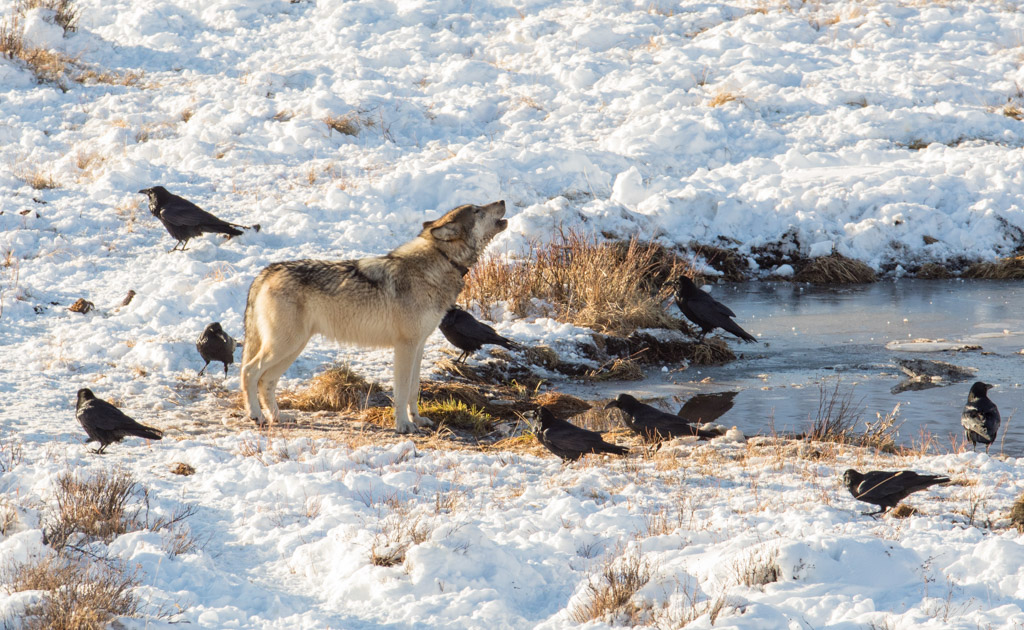 Ravens are highly regarded for their social skills, a complicated communication system, and excellent visual recognition. These vocal birds make lots of noise when they find a dead animal, drawing attention to the carcass so that larger, more “tooled” scavengers can open up the hide and eventually provide food for the ravens.

Those social skills have not gone unnoticed when observing wolf/raven interactions. Ravens have often been seen interacting with wolves, especially pups and yearlings. These intriguing birds have been known to grab sticks and play tug-of-war with wolf puppies, to fly over young wolves with sticks and tease the small canines into jumping up to grab the sticks, and even to boldly pull the tails of wolves to initiate a reaction. Some scientists have theorized that individual ravens may even develop special bonds with individual wolves within a pack.

Perhaps we will soon know more about this fascinating animal relationship, as a new research study in Yellowstone hopes to shed light on many facets of raven life, including their relationship with wolves on the landscape.

This article was originally published in the Spring 2020 issue of Yellowstone Quarterly.