Yellowstone Youth Conservation Corps Gets Back to Work

Text and photos by Sarah Santos

The year 2020 hit hard for just about everyone, but this summer Yellowstone’s Youth Conservation Corps (YCC) picked up right where they left off.

On a Thursday in early July it wasn’t hard to spot the yellow helmets in Madison Campground among all the set up campsites. The six yellow helmets belonged to this year’s YCC members, just a few of the hundreds that applied. The group of 15-18 years old were up early from a night of camping to get started on installing bear-proof storage boxes. 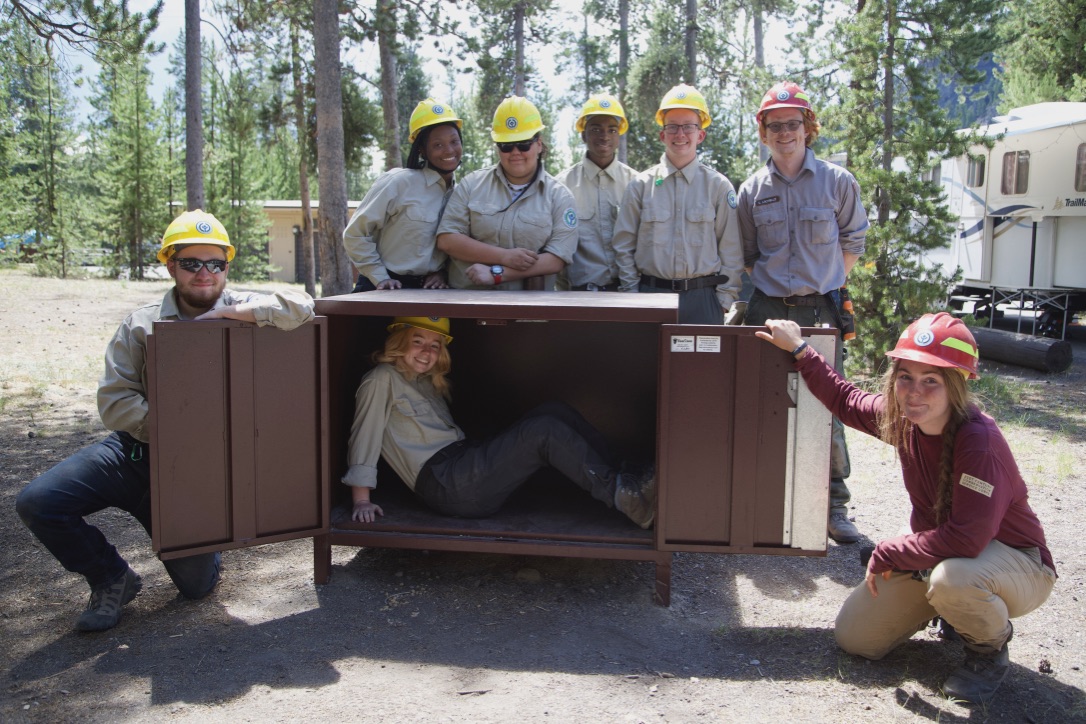 At the start of the year, 985 bear-proof storage boxes had been installed in campgrounds in the park. These boxes improve visitor safety and prevent bears from accessing human food. Preventing bears from obtaining human food is one of the top priorities of Yellowstone’s wildlife managers. Bears that gain access to human food eventually become more aggressive towards humans, and may need to be removed from the population.

With the 1,907 campsites scattering the park, 922 campsites still need bear boxes, and the YCC are not slowing down! Yellowstone Forever has been able to fund the installation of these bear boxes thanks to generous donations from our supporters. That funding helps make sure all the proper equipment and material is provided from set-up to completion. 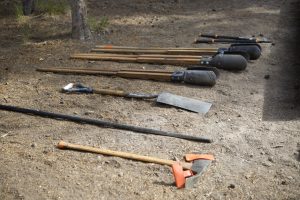 Some of the tools used to install bear boxes.

Seeing the bear boxes at first glance, one wouldn’t realize how much manual labor goes behind installing them. These boxes weigh up to 400 pounds! Though considering they’re meant to be bear-proof, 400 pounds does seem pretty necessary.

For a lot of the teens, being a part of YCC was a chance for a lot of firsts. 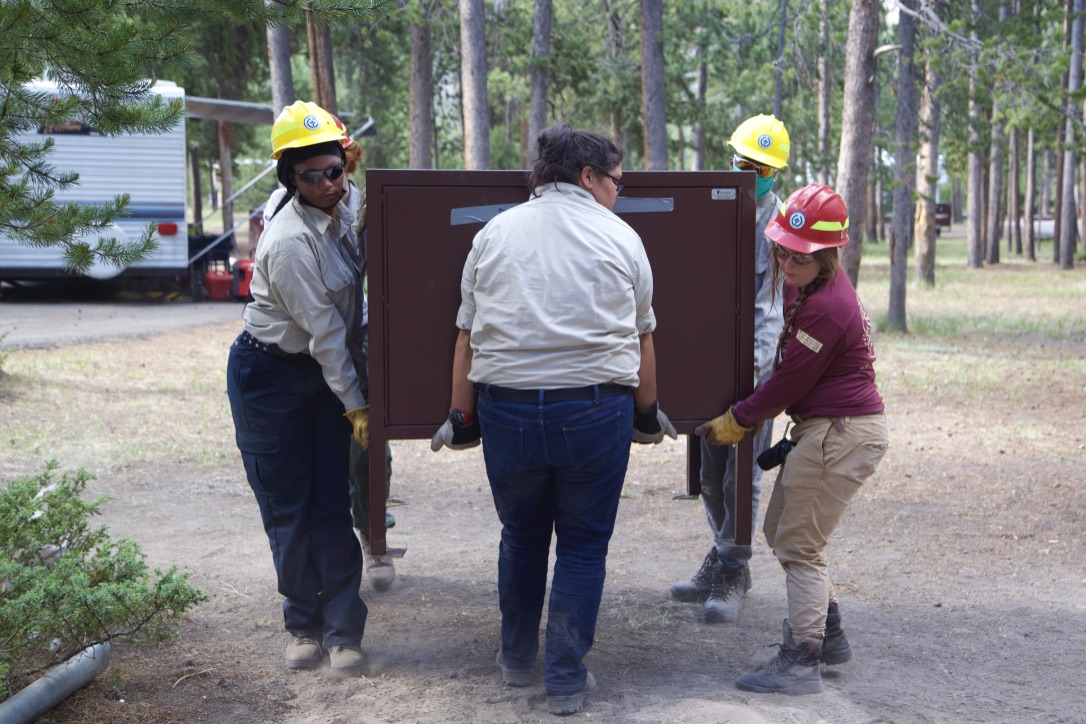 Many of the teens had never been to Yellowstone before, let alone a national park. As for why they all wanted to join in the first place, they had a lot to say. 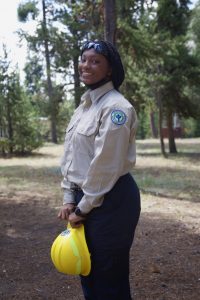 Amaya credits YCC for bringing her to Yellowstone for the first time.

“I want to be a park ranger, so I thought this would be a good start,” Caroline said. She wasn’t the only one either, most of the teens hope to continue service for national parks as a career.

“I like knowing I’m helping better my environment! But I also realized I really like doing this ’cause it’s a once in a lifetime opportunity and not many people get to say they live in Yellowstone,” Amaya said. “It’s my first time here, and I wouldn’t have ever considered coming if it wasn’t for YCC. I definitely learned to step outside of my comfort zone.”

It was just their second day out on the job, and you would think they’ve been in the parks all year with how much information they’d retained.

“I learned so much that I wouldn’t have known without being introduced to it through YCC! I learned about geysers, park construction, and how the park makes decisions based on the trails and animals,” said Brodie.

He went to Yellowstone for the first time on his birthday last fall, noting he fell in love with it and just wanted to see how he could help. 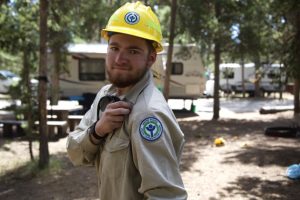 Brodie shows off his YCC patch and uniform.

Without a cell phone in sight, hearing about how much these teens are eager to help their environment was refreshing.

They took being off-the-grid to the next level, and for a cause well worth it. As their work day came to an end, they replenished with cupcakes and David recounted his first bison sighting. Looking out the bus window, he exclaimed at these large creatures, “Oh my gosh, he’s a B-boy! Look at him!” 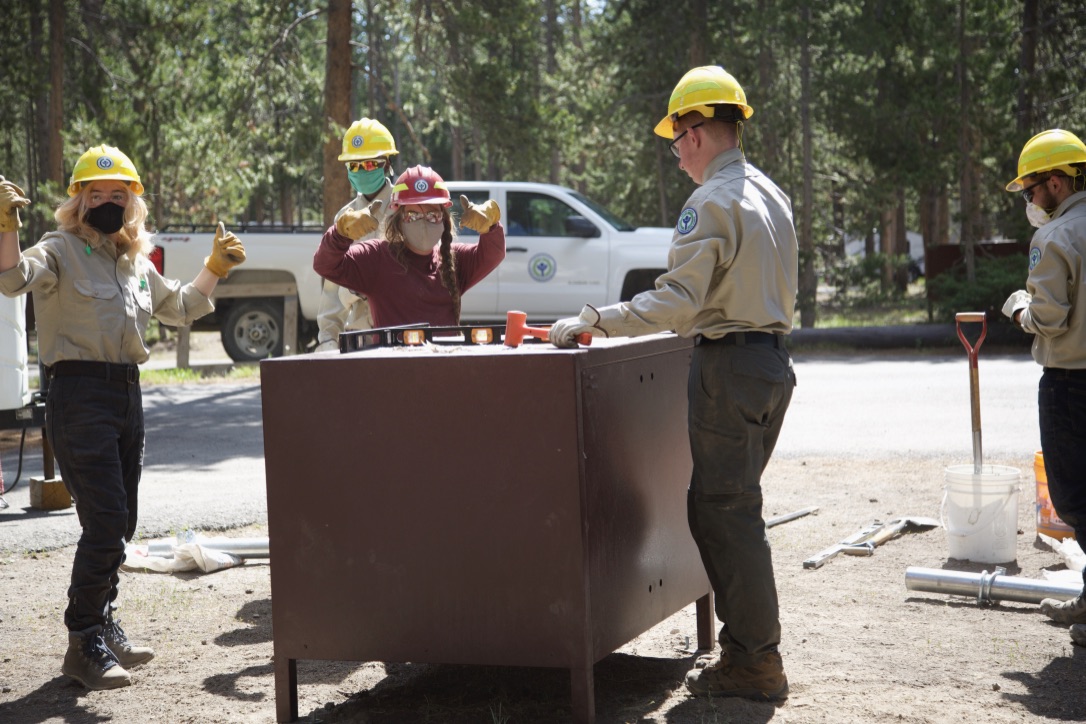 The YCC members celebrate the successful installation of a new bear-proof storage box!

Both the Yellowstone Youth Conservation Corps and installation of bear-proof storage boxes are only possible because of generous donations from Yellowstone Forever’s members. Consider making a donation to Yellwostone Forever today to support the important programs!